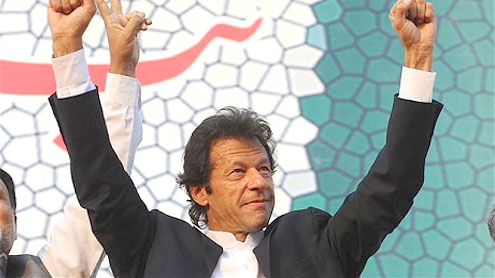 Cricket legend and opposition politician Imran Khan railed against the government and its alliance with the U.S. before more than 100,000 flag-waving supporters on Sunday, establishing himself as a force in Pakistani politics.

Khan, 58, entered politics 15 years ago when he founded Pakistan Tehreek-e-Insaf, or the Movement for Justice Party, but up to now he has struggled to translate his fame into votes.The rally in the eastern city of Lahore indicated his message may have found new resonance at a time when Pakistanis are fed up with the country’s chronic insecurity and economic malaise.”I have come here to register my hatred against this corrupt system,” said 29-year-old Nadeem Iqbal, who attended the rally.

A poll conducted by the U.S.-based Pew Research Center in June found Khan, the captain of Pakistan’s 1992 world champion cricket team, to be the most popular political figure in the country.Khan’s rising popularity could be a concern for the U.S., given his harsh criticism of the Pakistani government’s co-operation with Washington in the fight against Islamist militants.He has been especially critical of U.S. drone strikes targeting militants in Pakistan’s rugged tribal region along the Afghan border. The latest suspected strike killed six alleged militants on Sunday.

Khan has argued that Pakistan’s alliance with the U.S. is the main reason Pakistan is facing a home-grown Taliban insurgency.”Our leaders owned this war on terror for the sake of dollars,” Khan told the crowd assembled around the country’s most important national monument, the Minar-e-Pakistan. “Let me curse you. You sold out the blood of innocent people.”Pakistan’s state news agency, The Associated Press of Pakistan, estimated the crowd was over 100,000 people.Mosharraf Zaidi, a Pakistani political analyst, said the rally was significant because Khan’s party has not been able to attract such large crowds in the past.

Despite the strong show of support, it’s still unclear how much Khan can shake up the political scene in the next national elections in 2013. His support is largely confined to urban areas of Punjab, Pakistan’s largest province, where Lahore is the capital.Pakistan’s main opposition party, the Pakistan Muslim League-N, has dominated urban areas of Punjab in the recent past. Many analysts, including Zaidi, expect Khan’s party to siphon votes away from the PML-N.But given Pakistan’s electoral system, that may simply benefit the ruling Pakistan People’s Party rather than win seats for Khan’s party in parliament.

It’s also unclear exactly what Khan would do if he did win significant political power. He has been relentless in criticising the government for corruption and for its failure to address the many serious problems facing the country. But he has failed to offer many specifics about how he would fix these problems.”We don’t see top-shelf policy people, top-shelf professionals becoming part of the policy machine at PTI,” said Zaidi. “What we see is a lot of rhetoric.”

The suspected U.S. missile strike on Sunday targeted a vehicle in the Datta Khel area of North Waziristan, said Pakistani intelligence officials, speaking on condition of anonymity because they were not authorised to talk to the media.The U.S. refuses to acknowledge the CIA-run drone program in Pakistan, but officials have said privately that the attacks have killed many senior Taliban and al-Qaida commanders.

Pakistani officials often criticise the attacks as violations of the country’s sovereignty, but the government is widely believed to support the strikes in private. They are extremely unpopular among ordinary people who believe they mainly kill innocent civilians. – Thetelegraph