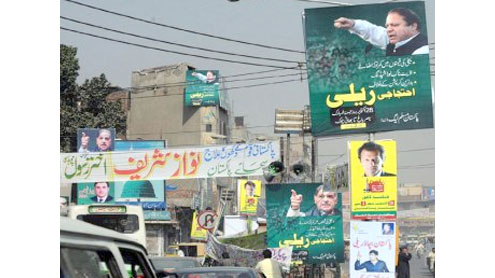 LAHORE: The PML-N is holding a major rally in the city on Friday (today), first of this level after the 2008 general elections, which will mark phase one of the party’s campaign to pile pressure on the government to quit and thus pave the way for general elections before the triennial polls on half of the 100 Senate seats due after five months in March.

Similar rallies will be held in various cities in the weeks and months ahead to mobilise the people, after which the country’s second biggest party will direct its legislators in the National Assembly and provincial legislatures to resign from their seats to create a void that cannot be filled through by-elections. “I don’t see the Senate elections taking place in March,” said PML-N Information Secretary Mushahidullah Khan while talking to a group of reporters here on Thursday.

Countless banners bearing pictures of the party leaders have been displayed on roads leading to the Nasser Bagh, from where the rally will start, and Bhaati Gate, the terminus. Leaders of all tiers have been given targets to bring participants so that a clear message could be sent to everyone that the city belongs to the PML-N.

Mian Nawaz Sharif, in Turkey since the last one week, is less likely to participate in the rally. Mian Shahbaz Sharif, Chaudhry Nisar Ali Khan, Hamza Shahbaz, Sirdar Zulfikar Khosa and Khwaja Saad Rafiq are expected to address the participants. Increase in power rates, loadshedding and widespread corruption are the major issues against which the rally has been planned.Mushahidullah Khan believes that it would be a big show by all standards and the massive participations would establish that people did not want to see the present PPP-led setup stay in power any more.

He said after warming up people across the country during the next few months, the PML-N leadership would go for the kill and ask all its legislators to vacate their seats. By then, he believed, many other parties would also join hands with the PML-N and their parliamentarians would also be willing to quit their seats.

The resignations would be in such a large number that general elections would become unavoidable, he emphasised.Asked how the president would resign as a result of rallies, the PML-N leader said public pressure would make many impossible-to-imagine things possible. He did not foresee any public reaction in Sindh in case the president is forced to leave the office.

According to Mushahidullah Khan, Imran Khan was no match to the PML-N as he had neither any public following nor experience of contesting elections. So far, he said, the PML-N had not started any campaign against the cricketer-turned-politician, and once it started exposing his ‘irregularities’ the people would see his real face.

He said at present, the PTI was non-existent in Sindh and Balochistan. It was operating only in some areas of Punjab and KP. Although the PTI could spoil some votes of the PML-N, it would also play a negative role against the PPP. And the adverse effect it had on the PPP votes would compensate the damage done to the PML-N.

Answering a question, he said the prime minister’s assertion that the PTI was damaging the PML-N vindicated the apprehensions that Mr Khan was being supported by some hidden hands. He claimed that many political heavyweights in Sindh and Balochistan would join the PML-N in the near future.

Former chief minister Arbab Ghulam Rahim was willing to join the PML-N along with four MPAs, three MNAs and one Senator. The party was also in contact with the Jatois, Mehrs and Sherazis of Sindh.
He said Mr Sharif was the only leader who would become prime minister in case the PML-N won elections. The establishment’s attitude towards the party now comfortable, said Mushahidullah Khan.