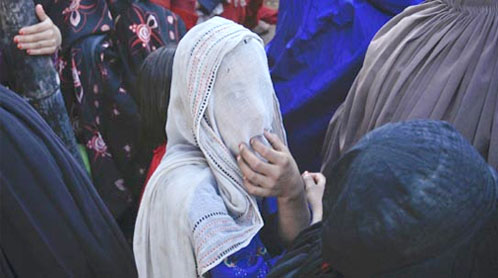 NOWSHERA:  It was difficult for 80-year-old Halimzai Khan to hold his position in a long queue of newly displaced persons from Bara, Khyber Agency, in Jalozai camp on Monday.

He was in the camp to enlist himself with the government to get relief items including tent and edibles, which he said were vital for the survival of his family. He continued to bear the continuous shoving and pushing by others, much younger to him, in a hope to get enlisted.At about 3:00pm the officials engaged in enlisting the newly arrived internally displaced persons (IDPs) stopped their work, leaving a large number of displaced tribesmen in a state of frustration.

“My sons were not around when the security forces ordered to vacate different areas of Bara tehsil on Friday last,” said Halimzai, adding that no arrangement was made by the government for transportation of hundreds of terrified people, who were streaming out of the troubled areas.

With stick-wielding security personnel frequently resorting to baton charge to control the increasing IDPs in the long queues, the old man, hailing from Qamarkhel clan of Afridi tribe, said that he had been joining the line for the last two days, but failed to get enlisted so far despite waiting throughout the day.Only four officials were busy in recording the details of the displaced persons and giving them tokens.

Soon after the officials left their makeshift registration office, the visibly frustrated displaced persons started complaining to journalists present there. “Why they don’t increase the staff for enlisting process,” asked Mohammad Ayub, who claimed that for the last two days he had to spend Rs300 for coming to Jalozai camp from Peshawar, where he and his family had been staying with relatives.

“Our relatives are poor people and can’t extend us hospitality for long,” he said.Many tribesmen were also accompanied by women and children as they were hoping that after enlistment they would get tent and start living in the camp, which has already been housing hundreds of IDPs from Khyber, Mohmand and Bajaur tribal agencies for the last many years.

The sprawling Jalozai camp is situated around 20 kilometres from the provincial capital and around 10 kilometres off the Grand Trunk Road.As these IDPs belong to conservative backgrounds, therefore, the visiting females were sitting around in huddles at a community centre in the camp. They were having very little mobility and throughout the day they continued waiting for their male family members engaged in struggle for their enlistment.

“We have been trying our level best to enlist all the newly displaced tribal people at the earliest,” said Adnan Khan, the spokesperson of Provincial Disaster Management Authority (PDMA), Khyber Pakhtunkhwa.He added that they were also in contact with the humanitarian agencies including UNHCR and World Food Programme, which were likely to mobilise their respective resources soon.

He said that presently they had been providing cooked food in the morning and afternoon to those newly arrived IDPs and on the first day of their enlistment on Saturday they were provided tents.“As the influx of IDPs was sudden, therefore, we have also been facing certain problems, which have now been overcome to a great extent,” Mr Khan added.

Several of the IDPs said that they had now been staying in tents with their distant relatives, who were displaced earlier and had been living in the camp. Some of them said that they had to stay in mosques in different localities in Peshawar.

According to the figures of PDMA, on Sunday last it had enlisted around 900 families with around 5,300 members. These enlisted families belong to different clans of Afridi tribe including 365 families from Akkakhel, 300 from Malikdinkhel, 94 from Sepah and 149 from Qamarkhel.

Almost all displaced persons have their tales to narrate about how they were asked to leave their respective villages within four hours and how they managed to flee the area with no proper transport facilities available.Shehzada Khan, hailing from Qamarkhel clan, said that his family had to walk for many kilometres following which he managed to hire a pick-up truck for onward journey to Peshawar.

“Normally a pick-up truck charges Rs1500 from our village to Peshawar, but on that day the driver charged me Rs4,000,” he said.Another person, Akber Khan, said that they had to flee the area in hurry, leaving behind valuables and even cattle at their residences. – Dawn