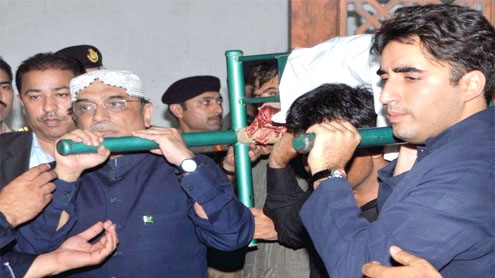 Born into a wealthy Iranian family that moved to Karachi, she married into what would become Pakistan’s most famous political dynasty in 1951 and became herself a powerful spiritual force within the PPP.Her body was interred next to that of her husband, Zulfiqar, the PPP founder who was hanged by the dictatorship of General Zia-ul-Haq in 1979.Cabinet ministers joined Zardari and Bilawal in lowering the body into the grave while police presented an honour guard and played the “Last Post”.

The PPP-led government has ordered a 10-day period of national mourning with Monday a public holiday, cancelling all his engagements.  “The national flag will fly at half mast during these days,” his office said in a statement as government offices, shops, schools and businesses closed across the country.Nusrat Bhutto was several times elected a member of the Pakistani parliament, but her life was scarred by personal tragedy and political difficulties.Aside from her husband, she also outlived three of her four children.

Her son Murtaza was shot dead in Karachi and her son Shahnawaz died in France.  She became chairman of the PPP from her husband’s death in 1979 until her daughter Benazir took over in 1984.Under Zia, she was put under house arrest and thrown into jail, then spent several years in exile after being allowed to go abroad for medical treatment.Benazir was assassinated in a gun and suicide attack at an election campaign rally in the garrison city of Rawalpindi in late 2007.Her widower and Nusrat’s son-in-law, Zardari then led the PPP to election victory in February 2008. – Dawn