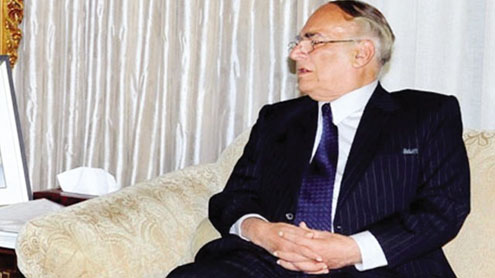 Kausar said Mehmood’s thoughts regarding Islam, politics and democracy were not only in correct directions at that time but still carry great value even today. “It is the high time to spare no efforts for strengthening the beloved motherland, Islamic Republic of Pakistan in all respect,” he added.Jamiat Ulema-e-Islam-Fazlur Rehman (JUI-F) organised the conference amidst heavy rain in the city to shed light on services of Mehmood for the country. The political observers termed the mood of conference as stepped-up campaign for general elections. JUI-F also organised similar show in Quetta last week.

Masood said Maulana Mufti Mehmmod was widely respected not only in the entire Indian Sub-Continent at that time but he also enjoyed distinguished position across the Islamic world due to his philosophy on religion, politics and democracy. The governor stressed the need to promote his philosophy for forging national solidarity.JUI-F central president Maulana Fazlur Rehman and Jamaat-e-Islami’s former amir Qazi Hussain Ahmad also addressed the conference.

The governor thanked Fazlur Rehman for providing him an opportunity to address the conference. He said it was a matter of great pleasure for him to speak about the life of Mehmood Mehmood was one of those great leaders whose sacrifices and struggle enabled us as a nation to get freedom and live in a free atmosphere, he added. Mehmood developed such a political culture in the country, which not only proved fruitful at that time, but also still is the need of the present century, he remarked. He was a great politician, historian, thinker and an institution in his own personality, said Kausar. The governor also congratulated the JUI-F chief for holding the successful congregation. – Dailytimes