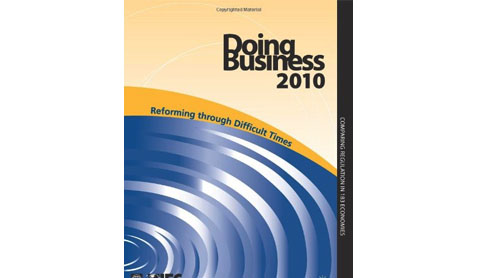 ISLAMABAD: A new International Finance Corporation (IFC) and World Bank report “Ease of Doing Business 2012” finds that economies continued to implement reforms that enhance local firms’ ability to do business, with transparency and access to information playing a key role in the reforms.

Released on Thursday, Doing Business 2012: Doing Business in a More Transparent World assesses regulations affecting domestic firms in 183 economies and ranks the economies in 10 areas of business regulation, such as starting a business, resolving insolvency and trading across borders. This year’s report data cover regulations measured from June 2010 through May 2011. The report rankings on ease of doing business have expanded to include indicators on getting electricity. The report finds that getting an electrical connection is most efficient in Iceland, Germany, Taiwan, China, Hong Kong SAR, China, and Singapore.

The global report shows that governments in 125 economies out of 183 measured implemented a total of 245 business regulatory reforms, 13 percent more reforms than in the previous year. In Sub-Saharan Africa, a record 36 out of 46 economies improved business regulations this year. Over the past six years, 163 economies have made their regulatory environment more business-friendly.China, India, and the Russian Federation are among the 30 economies that improved the most over time.Doing Business 2012 Fact Sheet: Summary of Doing Business Reforms in South Asia.

Pakistan increased the profit tax rate from 20 percent to 25 percent for small firms, and its international ease of doing business ranking have been down graded from 96th in the world in doing business report 2011 to 105th in doing business 2012 report. World Bank report has suggested Pakistan to undertake reforms in the areas like business regulation reform especially ease of paying taxes that are at present making it more difficult for taxpayers.

In the global ranking Pakistan was ranked 29 for protecting investors however, registering property ranked 125. Trading across border was ranked at 75, enforcing contracts (154) and resolving insolvency (74). In 2011 report, Pakistan made registering property more expensive by doubling the capital value tax to 4 percent. However, Pakistan reduced the time for trading across borders by improving electronic communication between Karachi Port authorities and the private terminals, which has also boosted efficiency by introducing new equipment.

In 2010, business start-up was simplified by introducing a system that allows online registration for sales tax and removing the requirement to make a declaration of compliance on a stamped paper.Afghanistan made getting electricity easier by improving the efficiency of the electricity department in Kabul and introducing a new fee schedule for connections. Areas of business regulation reform: Getting electricity Rank in Doing Business 2012: 160 Rank in Doing Business 2011: 154.

“South Asia’s governments have empowered entrepreneurs by implementing regulations that are efficient, accessible, and sustainable, and they should continue to seek avenues for improvement.” Sri Lanka rose nine places in the global ranking to 89, partly by strengthening investor protections and reducing taxes on business. India, the region’s second top performer in the global survey, climbed seven places to 132.

Recently implemented mandatory electronic filing and payment for value-added tax made paying taxes easier for Indian firms. Among the region’s economies, the low- and lower-middle-income economies of Afghanistan, Bhutan, India, and Nepal also improved business regulations for local firms. Bhutan, rising four places to 142, recently launched a public credit registry and streamlined business start-up while Afghanistan, ranked 160, made it easier for local businesses to get an electrical connection.

New data show that improving access to information on business regulations can aid entrepreneurs. In five of South Asia’s economies, traders have access to relevant documentation requirements online or through public notices. Meanwhile, fee schedules for electricity connections are easily accessible in three economies.“South Asian economies have an opportunity to increase access to information for entrepreneurs,” said Sylvia Solf, lead author of the report. – Dailytimes