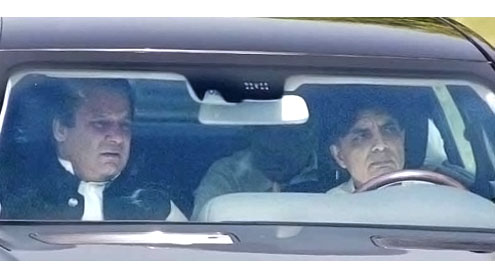 ISLAMABAD: Saner elements in the National Assembly (NA) blocked the way of the Pakistan Muslim League-Nawaz (PML-N) and the Muttahida Qaumi Movement (MQM) parliamentarians on Tuesday as they tried to physically assault each other in fits of anger following the fiery speech of Opposition Leader Nisar Ali Khan, in which apart from verbally bashing the MQM, he demanded opening of a debate in the House on former Sindh home minister Dr Zulfiqar Mirza’s allegations.

As the opposition leader was about to wind up his scathing speech against the MQM, a stinging remark from MQM MNA Syed Tayyab Hussain further excited the already enraged PML-N parliamentarians and some MNAs, including Abid Sher Ali and Sardar Shafqat Hayat, tried to physically assault the MQM lawmakers. From the MQM, too, a number of MNAs including Sajid Ahmed and Asif Husnain pushed up their sleeves to have an all-out brawl with the PML-N parliamentarians.The prompt interference of Ahsan Iqbal, Khawaja Asif, Qamar Zaman Kaira, Khurshid Shah, Akhunzada Chattan and many others foiled the repeated attempts to fight from both sides, but the furious lawmakers of the PML-N and the MQM continued to shout rich and colourful insults at each other nonetheless.

PERSONAL ISSUES: Speaking on a point of order, Nisar said that one party (a thinly-veiled allusion to the MQM) was bringing up personal issues of other politicians (PML-N’s Hamza Shahbaz) in the House, which were also sub judice, just to avoid accountability from the public on its “somersaults”. “They should first clarify their position on the charges of terrorism and extortion… their somersaults are the worst example in the country’s political history,” he said.Nisar said the PML-N had no plans to move a no-confidence motion in the House. “If at any stage we intend to do so, we will never contact the MQM, though we might seek help from the MNAs of the PPP (Pakistan People’s Party),” he said, adding that the MQM was exploiting Ayesha Malik’s case while it kept mum on “those daughters of the nation who were killed in Lal Masjid” when MQM was part of former president Pervez Musharraf’s government. “They also never raised their voice for another daughter of the nation, with the last name Gabool,” he said, referring to the ex-wife of MQM chief Altaf Hussain.

ZULFIQAR MIRZA: He demanded the government initiate a debate in the House on Zulfiqar Mirza’s revelations. “His revelations relate to national security, therefore cannot be overlooked… Zulfiqar Mirza should be summoned in the House to apprise parliamentarians of his revelations,” he said, adding that instead of going to London Mirza should bring his “suitcases full of evidence” to parliament.Hailing NA Speaker Dr Fehmida Mirza for her patience, Nisar said: “I salute the speaker for listening to such derogatory remarks from Muttahida’s lawmakers about her husband with patience… due to President (Asif Ali) Zardari’s imposed gagging act on the PPP MNAs, no one from the treasury benches dared to come forward to rescue their sister (Fehmida) from the embarrassing remarks of the MQM parliamentarians… I also pay homage to the speaker for her act of not expunging Muttahida’s remarks about Zulfiqar Mirza,” he said. Deputy Speaker Faisal Karim Kundi, however, expunged all derogatory remarks against Dr Zulfiqar Mirza.

Lambasting the prime minister, Nisar said: “The prime minister often claims that there are no political prisoners in the country… I ask him who is Afaq Ahmed? Is he not a political prisoner?” Nisar questioned. Nisar termed the MQM a fascist party and said it never held intra-party elections. He also asked Kundi to allot seats on the treasury side to all parliamentarians and parties that were part of the government. “Members of treasury benches must also not use the opposition lobby… after two or three days, we will stop government members with force from using the opposition lobby,” he said.

Opposing the Defence Housing Authority Islamabad Bill of 2007, Nisar said no housing society could be awarded statutory status. “The government is trying to give protection to land-grabbers through this bill… How can this House do legislation on the land of Punjab? We must not be forced to approach courts against this unconstitutional bill,” he said, threatening the government that if it did not withdraw the proposed piece of legislation, the PML-N would physically stop the bill’s passage from the House.

He also raised concerns over the delay in the formation of the parliamentary committee to ensure the implementation of the All-Parties Conference resolution. Religious Affairs Minister Syed Khurshid Shah said the PPP would sit with the PML-N members to work out the differences on the piece of legislation and bring it back to the House next week.RELATIONS WITH BIN LADEN: Reacting to Nisar’s tirade, Syed Asif Husnain of the MQM said the PML-N should also clear itself from charges of having relations with Osama bin Laden and using drug money for elections. “How can a party control the government when it has badly failed to control dengue?

The PML-N is frustrated because of its political isolation in the country,” he said. Speaking on a point of order, Khawaja Saad Rafique raised questions on the accuracy of voter lists and the ongoing census. “These lists are faulty, missing votes of millions of people,” he said.Responding to Rafique’s concerns, Interior Minister Rehman Malik said a complaint cell would be established at the NADRA to remove faults and loopholes in census blocs. – PT