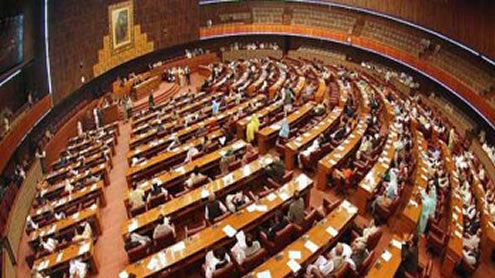 ISLAMABAD – The House witnessed another pandemonium on Monday when parliamentarians of the Pakistan Muslim League-Nawaz (PML-N) and the Muttahida Qaumi Movement (MQM) levelled serious charges against each other citing Zulfiqar Mirza’s revelations and the arrest of Ayesha Ahad Malik.

Speaker Fehmida Mirza showed absolute neutrality when her husband Zulfiqar Mirza was being criticised, but adjourned the House when the debate went beyond the norms of decency. Speaking on a point of order, MQM’s Asif Husnain said Ayesha Ahad Malik, the alleged wife of Hamza Shahbaz, was being victimised by the Punjab government. Upon it, Sardar Mehtab Abbasi stood up with all PML-N lawmakers and protested, saying personal issues of parliamentarians should not be discussed in the House. Federal Minister for Overseas Pakistanis Dr Farooq Sattar said a daughter of nation was being subjected to torture. “It is not the Punjab Assembly where things will proceed according to PML-N’s desires,” he said. Sattar said he was citing the remarks of the Lahore High Court chief justice on the Ayesha Malik case, adding that a case under Section 365 had been registered against her.

Ayesha Malik , daughter of former parliamentarian Ahad Malik, has claimed that she was married to Hamza Shahbaz Sharif and she had all evidences, including the video and documents of her marriage.Reacting to Sattar’s comments, Abbasi asked the speaker to switch off Sattar’s microphone, saying they did not want to listen to such worthless things. As the heat between the two sides increased, PPP’s Chief Whip Syed Khurshid Shah stood up to pacify things, advising both parties to refrain from discussing personal matters in the House.

Shireen Arshad Khan of the PML-N asked the government to clarify its position on Zulfiqar Mirza’s revelations about the MQM. “Why are Dr Mirza’s revelations being ignored and the government not taking action against the criminals exposed by former Sindh interior minister?” she asked.Responding to Shireen’s remarks, Waseem Akhtar of the MQM demanded the federal and Sindh governments to arrest Zulfiqar Mirza under MPO. “Mirza has lost his mental equilibrium … he is hell bent on destroying the hard-earned peace of Karachi,” he said, asking the president and prime minister to rein in Mirza. On Waseem’s speech, the PML-N lawmakers chanted slogans of ‘Bhatta Khor…Bhatta Khor’ (extortionists) slogans.

Captain (r) Safdar asked the MQM parliamentarians to refrain from indulging in the politics of mud-slinging and discussing personal issues in the House. “If others bring such matters in the House, we will be compelled to reveal documents, photos and even videos of the opponents which are secured with us,” he said.Bushra Gohar of the ANP said the Ayesha Malik issue was a case of domestic violence, not just a personal matter. Qudsia Arshad of the PML-N paid tribute to Zulfiqar Mirza. She said the former provincial interior minister had unveiled the truth.

In response, MQM’s Sajid Ahmed said his party was just raising the case of an oppressed woman. “I do not like to utter the name of the man who is being paid tribute by the PML-N … he is a drunkard… he and his armed men killed Urdu-speaking people in Lyari,” he said.  – Pakistantoday