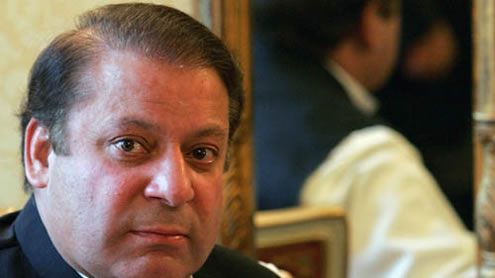 Talking to a private news channel, Nawaz Sharif said a lesson should be learnt from the past mistakes and all the stakeholders should sit together to sort out the problems. The PML-N president said that the political parties having militant wings should be banned. He said he would quit politics if it were proved that he or his party had links with militants or banned outfit.

“The negative politics should be ended,” he said. To a question, he said that the dengue virus would be overcome in Punjab by Chief Minister Shahbaz Sharif. He said that his party wanted good relations with India on the basis of equality. He said that the allegations levelled by former US joint chiefs of staff Admiral Mike Mullen against Pakistan were totally baseless

Nawaz Sharif said that if the situation came to “Zardari Hatao Mulk Bachao” and dharna politics, it would be due to Zardari who, he remarked, neither had the political will nor ability. He questioned whether Zardari was supporting Pakistan or those levelling allegations against it.Nawaz said that the Supreme Court, in its decision on the suo motu proceedings on the Karachi law and order situation, had mentioned militant wings of some parties, therefore they should hand over the accused to the law. However, he said that the situation is quite different after the Supreme Court verdict, with the parties having militant wings accelerating their efforts for alliance.

Replying to a question, the PML-N chief said that he had taken the stance in the All-Parties Conference that all of us, including politicians, army heads and agencies, should learn a lesson from past mistakes. “Musharraf made mistakes under pressure, provided illegal incentives, but we all should jointly steer the country out of this difficult situation,” he stated.Nawaz said everyone should abide by the constitution and those who crossed its limits, should be stopped. He said that the present rulers were running democracy “like a maid” and not only earning bad name for themselves but also giving a bad name to democracy. He said the president and prime minister lacked the ability to take initiative.

He said that national sovereignty and country’s image cannot be safeguarded through begging bowl. “Elected government, parliament, opposition, armed forces and agencies should play their role for evolving national policies,” Nawaz said, questioning whether the Abbottabad operation by US forces was not an attack on the sovereignty of Pakistan.Nawaz said the president and the PM had asked the Americans to continue drone attacks while they would protest over them verbally. – Dailytimes