Dr Tahir did not take colleagues, N into confidence 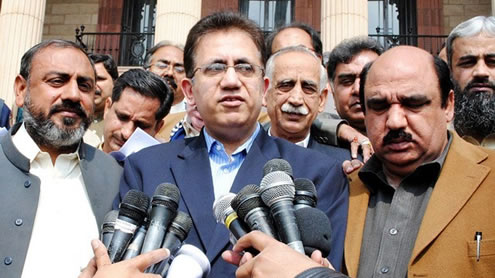 LAHORE – Dr Tahir Ali Javed, whose ‘advice’ to Punjab Chief Minister to dissolve the provincial legislature was the hottest subject of discussions during the past 24 hours, says he had not taken his Unification Bloc or the PML-N leadership into confidence before unveiling what may be regarded as a political bombshell.Talking to TheNation on Monday evening, he said the statement would not adversely affect his ties with the PML-N. The PML-N has distanced itself from the statement, saying it is the personal opinion of the doctor-turned-politician.Dr Tahir claimed that the Senate elections were not in his mind when he had offered the advice to the chief minister. In fact, he said, he had tried to propose a solution for the early elections, which otherwise were due in the first quarter of 2013.He said because of the federal government’s failure to come up to people’s expectations, everybody wanted an immediate change. Some people even talked about a revolution, without realizing the implications that it could have for a country like Pakistan.

Dr Tahir said what he had said was entirely constitutional in nature and in the best interest of the country. The idea, he said, had provided the people a subject of discussion and after discussing it from all aspects they would be able to reach some conclusion as to what was good for the country.Protests, he said, could also lead to the change. But, he made it clear that at a time when the national economy was already in a very bad shape, protests would only aggravate the situation.Referring to the bitter criticism the proposal had attracted, Dr Tahir said the critics must bear in mid that he too was a stakeholder who would lose the assembly seat in case the chief minister accepted his advice.“Dissolution of the Punjab Assembly will lead to early elections. But my advice has nothing to do with the Senate polls (due in March)”.

Answering a question, he said it was for the chief minister to decide whether to agree to his proposal.Another methodology that could bring the federal government under pressure to hold early elections was to tender en bloc resignations, said the Unification Bloc chief. “We are ready to exercise even this option”, said the legislator from Shakargarh.Asked if he had floated the idea after consulting his Unification Bloc colleagues, Dr Tahir answered in the negative. “I have talked only to a few of them”, he said.Questioned if the proposal was not ill-timed, he said in fact everybody was saying the rulers should seek a fresh mandate and his idea should also be seen in the same context.

He claimed that some sitting as well as former ministers and legislators had endorsed his views. Many from the general public had also supported the idea, he said.“Had any PML-N leader contacted you to express disliking for the proposal?” he was asked.In response, he said: Nobody contacted me to say anything negative. However, he claimed, there were some who had come up with a positive response.Responding to a question, he said his proposal was likely to be discussed by the Unification Bloc members at the next session of the Punjab Assembly, due next week.He said he did not need the PML-N’s consent for the proposal as “I haven’t said anything illegal, unconstitutional”. He said everybody had the right to have an independent opinion which should be respected by others. – Nation

Railway officials to appear before President today to resolve crisis