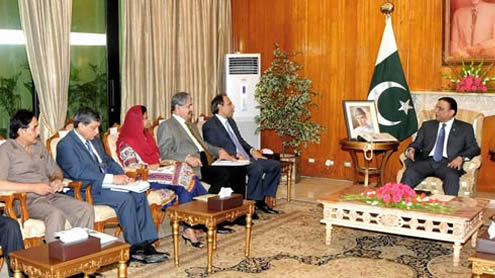 The nomination of Admiral Bokhari surprised many observers in the capital because some other persons were reportedly being considered for the post. The NAB became dysfunctional on July 20 on the orders of the Supreme Court which said that the organization could not function in the absence of a chairman.“President Zardari has nominated Admiral Bokhari and sent a summary to Prime Minister Yousuf Raza Gilani for his appointment as NAB chairman,” President’s Spokesman Farhatullah Babar said.“The president also sent a letter to Leader of Opposition in the National Assembly Chaudhry Nisar Ali Khan for consultation as required in the NAB ordinance,” he said. Sources said the law ministry had sent a summary nominating Admiral Bokhari for the post to Prime Minister Yousuf Raza Gilani a few days ago.

The prime minister accepted the summary and forwarded it to the president for approval. Under the NAB ordinance and directives of the apex court, the government has to consult the leader of opposition over the appointment of NAB’s chairman.The leader of opposition has not taken any decision on the issue, but his party’s spokesman Mushahidullah said the opposition party would not accept the decision because NAB’s chairman should be a non-political person.He also leveled allegations of corruption against the retired admiral. However, he later withdrew the allegations and said he had confused his name with that of another former Navel Chief.

The PML-N spokesman said his party’s leadership would hold a meeting to discuss the nomination.

He did not confirm that Chaudhry Nisar had received a letter from the president in this regard and said that his party would respond in accordance with the constitution.It may be mentioned that the leader of opposition had rejected the name of Justice (retd) Syed Deedar Shah for the post but despite that the government appointed him as NAB chairman in October 2010. But three months later Justice (retd) Shah was removed by the Supreme Court which said he had been appointed without ‘meaningful’ consultations with the opposition.Earlier, the government was considering the names of recently retired judges of the Supreme Court, Justice Javed Iqbal, Justice Sardar Raza Khan and former chief justice (retd) Abdul Hameed Dogar and Punjab Governor Latif Khosa for the office.

But all these names were dropped in favour of Admiral (retd) Fasih Bokhari who retired as four star naval officer after serving as Chief of Naval Staff from 1997 to 1999.He is a graduate of the French Naval War College and held several high posts in the navy.The post of NAB chairman has been lying vacant since the removal of Deedar Hussain Shah in March this year.NAB suspended its operations on July 20 after the expiry of the 30-day deadline given to the government by the Supreme Court to either appoint a chairman or wind up the organization. The government ignored the deadline and pleaded in the apex court that it could not appoint NAB chairman till the apex court decided its petition seeking a review of the removal of Justice Shah.

The Supreme Court rejected the government’s plea and ordered that its June 21 judgment would prevail (under which 30-day deadline was given). – Dawn