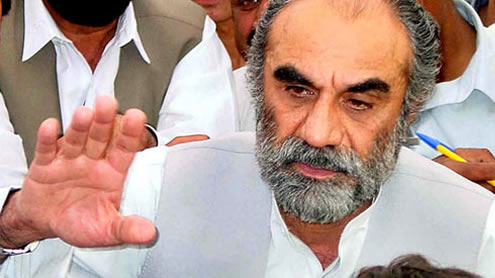 QUETTA: Law-enforcement agencies have busted about 150 cells of criminals involved in target killing and incidents of robbery and kidnapping for ransom in Balochistan, a meeting of the provincial cabinet on the law and order has been informed.The two-day meeting, presided over by Chief Minister Nawab Aslam Raisani, concluded on Saturday evening.

Home Secretary Nasibullah Bazai informed the cabinet that elements opposed to peace were taking advantage of porous border with Iran and Afghanistan to carry out their subversive activities.“We have enough proof of foreign involvement in anti-state activities in Balochistan,” he said.Giving details of the cells of criminals which have been smashed, the home secretary said that 44 of them were involved in target killings and 48 in robberies.He said that 47 gangs of car thieves and 11 involved in kidnapping for ransom had been eliminated.

The meeting was informed that 985 criminals involved in terrorism and other heinous crimes had been tried in courts and sentenced. Of them, 875 were in jail facing trial in courts.He conceded that many people involved in crimes had been acquitted because of lack of evidence.He said that steps were being taken to monitor the movement and the influx of Afghan refugees with the help of a bio-metric system set up along the Pakistan-Afghan border and scrutiny of property of Afghan refugees.Referring to the issue of missing persons, the home secretary said it was a big problem for the provincial government.He said that 52 people were missing in the province and many others had been recovered.

At present, he said, the provincial government was facing several challenges, including law and order, target killings, sectarian killings, terrorism and tribal feuds.“The government is taking steps to resolve these issues,” he said, adding that registration of the Afghan refugees in the province had already been started.The meeting was informed that task forces under the supervision of deputy commissioners had been formed in all districts and Chief Minister Aslam Raisani had directed that a task force should be formed at the provincial level.The meeting decided that car and property dealers would also be registered, recruitment on vacant posts of investigation officers in Levies Force would be made immediately and funds would be provided to various departments for maintaining law and order.The cabinet discussed recent attacks on buses and decided that steps should be taken to protect pilgrims going to Iran and to make it mandatory for such visits to be organised by tour operators.

Nawab Raisani directed the officials concerned to form a committee to contact the people recovered from kidnappers to give evidence against kidnappers.“The government will provide them full security,” the chief minister said.The meeting decided to set up a forensic lab in the provincial capital and to encourage the district administration and police personnel who had performed well.The chief minister said that all available resources would be used for training police and Levies personnel on modern lines and cooperation from stakeholders would be sought in this regard.He said that lists of missing people had been sent to the president and the prime minister and the Balochistan government was in contact with the federal government in this connection. – Dawn