by Top
in Balochistan, Pakistan
0 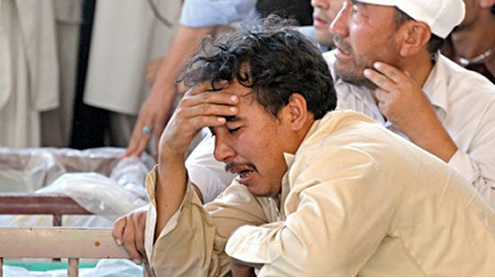 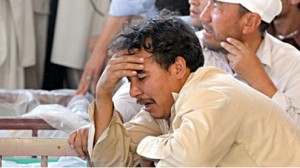 QUETTA – Tragedy again visited the Hazara community on Tuesday when 13 members of the religious minority and a Sunni man were barbarically gunned down in the outskirts of the provincial capital on Tuesday. This was the third such attack targeting Hazara Shias in a month. A similar attack on a bus in Mastung on September 20 killed at least 26 Hazara Shia pilgrims while they were on their way to Iran, while three Hazaras were killed in Machh on September 23 in an attack on a passenger van. No one has claimed responsibility for the attack although the previous attacks were claimed by the banned Sunni militant organisation, the Lashkar-e-Jhangvi.

Per details, a group of Hazara Shias were travelling within Quetta, from Brewery to the Hazar Gunji area, along the Western Bypass in a mini bus when a pickup truck carrying armed men intercepted it. The gunmen then opened indiscriminate fire on the vehicle, killing five people on the spot. The dead and injured were rushed to the nearby Bolan Medical Complex in the very bus they were attacked, but nine of the injured died on the way and at the hospital. Those critically injured were later moved to Combined Military Hospital. One of the dead was a Sunni who also came under fire.

“Four or five armed men in a double-cabin pickup forced the bus to a halt and opened indiscriminate fire,” said DIG (operations) Hamid Shakeel. He said a police party was escorting a pickup of a group of Shia vegetable traders in the area and they had been taken to safety after the attack. He said if any group or individual belonging to the Shia community informed police about their movement, police provided them adequate escort due to the prevailing security situation. Shakeel said like the Shia pilgrims killed in Mastung, the commuters had not informed police of their movement.

Police Chief Ahsan Mahboob placed Brewery Station House Officer Wahid Bakhsh under suspension for his failure to provide security to the group of Shia travellers. Angered by the killing, hundreds of Shias reached Bolan Medical Complex and set the bus carrying the men on fire. The protesters blocked the Brewery Road and Western Bypass for vehicular traffic for hours and chanted slogans against the government. A group of around 200 female students of Government Girls College Cantt also staged a rally outside their college against the killing.

Later, a joint funeral was held in Hazara town graveyard for the deceased. “Our government, our law enforcement agencies have left us at the mercy of these barbarians,” Abdul Khaliq, a leader of the Hazara Democratic Party, told a private TV channel. London-based Amnesty International said the killings highlighted the failure of Pakistani authorities to address sectarian violence across the country. “These are not random killings but demonstrate the deliberate targeting of the Shias by armed groups,” said Amnesty’s Asia-Pacific director Sam Zarifi. – pakistantoday

Flood affectees of Sindh: On the lookout for mine and your Help!