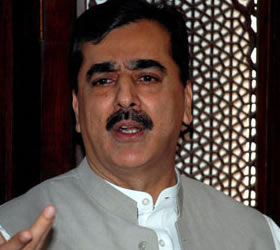 Prime Minister Syed Yusuf Raza Gilani on Saturday visited various areas of Lahore without protocol during more than two hours of drive in a four vehicle motorcade. It was raining when the Prime Minister visited the residence of his teacher late Prof Waris Mir in Johar Town and met his sons including renowned journalist and anchorperson Hamid Mir, Amir Mir and Imran. The Prime Minister stopped at all the signals of Centre Point, Walton Chowk and Akbar Chowk. Lahore Police and Traffic Police remained unaware of movement of the Prime Minister and people were pleasantly surprised by finding the Prime Minister amongst them. The Prime Minister stopped at many places, met people and listened to their problems.
He himself was driving his vehicle while workers of Peoples Party Habibur Rehman alias Mani Pehlwan sat beside him and the back seat was occupied by party worker Arif Khan. Chairman Evacuee Trust Property Board Syed Asif Hashmi was also accompanying the Prime Minister, who visited the home of party worker Shabnam Pervaiz, who was amazed by his presence and could not contain her emotions. As Prime Minister reached the house of Shabnam Pervaiz the light went out. During his half an hour stay at the house, the light never came back and they have to use torch. Shabnam said with the arrival of Prime Minister she was repaid for her services for the party and she is feeling that today Shaheed Zulfikar Ali Bhutto and Benazir Bhutto are present with them.
The Prime Minister embraced the grandsons of Shabnam and gave them Eidi for buying of toys. The Prime Minister gave Rs. 20,000 to Shabnam and paid two year rent of her house. As he left house of Shabnam Pervaiz she raised slogans in her unique style. The people in the street went on top of their homes to get a glimpse of the Prime Minister. – App
Previous Post