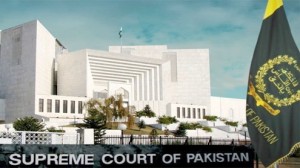 ISLAMABAD: The Supreme Court (SC), on Tuesday, directed Punjab Auqaf Department secretary to submit a comprehensive report on the property attached so far and the land retrieved from illegal occupants within four weeks, besides further measures to secure it.The department was ordered to take necessary action wherever it was required to retrieve its land from the illegal occupants.A two-member bench, comprising Chief Justice Iftikhar Mohammad Chaudhry and Justice Ghulam Rabbani, issued the directive after resuming hearing of a plea moved by Muhammad Boota, custodian of a shrine of Baba Noor Shah, over occupation of land of the shrine by the Punjab government for Ashiana Housing Scheme.

The bench asked Punjab Advocate General (AG) Khawaja Harris that he was required to satisfy it on the question whether under Sections 15 and 16 of the Punjab Property Act, the land could be overtaken.The bench, in its order, asked the Punjab Auqaf Department to accelerate proceedings in accordance with the law against responsible individuals.The authorities were directed to take up cases pending in courts and make a request to chief justice of the Lahore High Court through the registrar for early disposal of these cases.The bench, in its order, made it clear that the authorities concerned should ensure that income from the shrine’s land would be spent on the welfare and benefit of general public.

At the outset of proceedings, the AG said that welfare projects financed by income from the lands leased out near the shrine could be utilised.He informed that Ashiana Housing Scheme was a project meant for low-income people, as the Punjab government had invested Rs 2 billion in the project.The CJ observed that every effort should be made to develop the shrine.He told the AG to satisfy the court in writing that the scheme would be in accordance with the law, after which the bench would pass an appropriate order. The AG said that there was total of 40 kanals of land where the devotees stayed and welfare projects could be initiated in the name of the shrine.Representatives of the Auqaf Department apprised the bench that in order to launch welfare projects, the scattered land could be used. – Dailytimes