Fresh round of violence: Lyari stunned as 6 funerals emerge from one lane 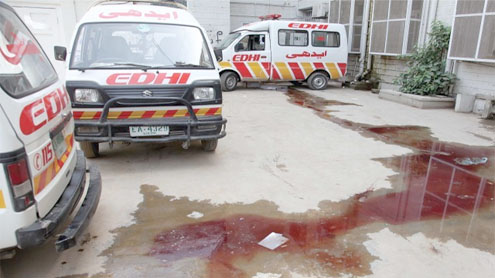 KARACHI: Six biers were shouldered atop heavy hearts from Lyari’s Sangu Lane on Thursday, leaving nothing behind but shrouded widows, grief-maddened fathers, and confused young children amid fading photographs.It started off like any other fun evening. A group of young men went out to Zainab Market to finish their Eid shopping.

Two borrowed Rs1,000 from their older, well-off cousin to buy shoes, stopping first at Kharadar to grab a bite.Twenty-four hours later, their families were in mourning. The night was spent in a frantic search for the men who had gone off the radar. Then Maula Baksh’s phone rang at 6:30 am. He had been desperately searching for his 27-year-old son Shahnawaz, asking the police and Rangers if they had detained him. The caller was someone from Civil hospital.

Baksh’s son was identified from among the bodies that were found in PECHS in gunny bags. “My son and I were the only earners,” sighs Baksh. Shahnawaz was employed at the Hubco power plant, and barely had any time to go shopping. This was the only free time he had had in a while to venture to the market.Shahnawaz’s three children ­— one-and-a-half-year-old triplets — crowd around their mother and grandmother.“They have holes in their hearts,” their grandfather says, as he receives more mourners.Neighbours sang Shahnawaz’s praises. “He was always there to help someone out – if someone was sick, he’d take them to the hospital, he’d run errands… he just went shopping to buy something for his son,” said one woman.

His 18-year-old sister Amna spoke eloquently about her brother, a stark contrast to her deathly silent sister-in-law and wailing mother, who has not slept since her son went missing.“We do not want Mohajirs to be killed in retaliation for our brother’s death and for their mothers and fathers to feel the pain that we are feeling now,” Amna quietly said. “We just want an end to this bloodshed and for peace in the city. That is all.”Neighbours amassed around the grieving 25-year-old Naureen Shahnawaz and her three children. “When her son grows up and learns how his father was killed, won’t he want to take up arms?” questioned an angry woman.The anger – among the women – is not at political parties, but at the government, for failing to take a stand for Lyari’s young men and working to improve security in Karachi.

The deaths of the young men have shocked even old hands at the defunct Peoples Amn Committee who are used to the blood and guns and gore. The mourners question everything, unwilling to understand or accept the senseless killing of six of their own boys.Bakht Bibi, who lost her 26-year-old son Nadir, says, “It wasn’t like this during [Zulfikar Ali] Bhutto’s time or in Benazir’s time.”Nadir would always tell her when he left the house. “He would tell me to pray for him.”On that day, he didn’t.His six-year-old daughter, Bisma, points to her father’s picture. “Abba hain! Nadir!” When asked where he is, she innocently replies that he has gone for Hajj.

Nadir’s cousin, Irfan, a Lyari resident, was also among the group that had ventured out to Zainab Market. “We had just begun to mourn Irfan’s death when word came that Nadir’s body had been found as well,” says Mohammad Sharif, their cousin who lent them the money to go shopping.Irfan was planning to move to the Gulf to find work, a promised land of sorts for Lyari’s young Baloch men, who have seen generations move to the UAE and Oman to find work.All that is left of his dream is his brand-new passport.Sharif says that as Irfan’s body came in, another man a lane away had just found his son’s body in an Edhi mortuary. He touches his own passport in his pocket. “I cannot wait to leave Karachi and go back to my job in Dubai. This has shocked me beyond belief.” – Tribune