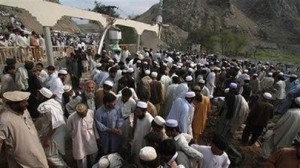 KHYBER AGENCY: At least 40 people were killed and several wounded when a power blast ripped through a Jamia Mosque in Khyber Agency during Friday prayers.The dead and wounded are being shifted to nearby hospitals.
According to reports, around 500 people were offering prayers at the time of the blast.The blast has badly damaged the mosque.The nature of the blast could not be ascertained yet. – SAMAA