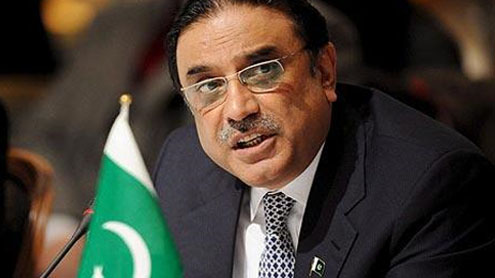 ISLAMABAD: President Asif Ali Zardari on Tuesday called for early completion of mega development projects in Balochistan to provide jobs and opportunities to the people and bring the province at par with rest of the country and address sense of deprivation among people. Balochistan’s speedy development is top priority of the government, he said chairing a high level meeting to review progress on mega development projects, and called upon the state functionaries to step up their efforts as the government could brook no further delay.
Briefing the mediapersons about the meeting, Spokesperson to the President Farhatullah Babar said that four separate presentations were given today each by Deputy Chairman Planning Commission Dr. Nadeemul Haq, Chief Secretary Balochistan Mir Ahmad Baksh Lehri, Chairman National Highway Authority (NHA) Muhammad Ali Gardezi and Chairman Water and Power Development Authority (WAPDA) Shakil Durani, on development projects in infrastructure, transport and communication system, water sector projects including small and medium dams and other projects under the Aghaz-e- Haqooq-e – Balochistan package.

The meeting was informed that out of 1180 ongoing projects being executed through PSDP of current year (2011-12) throughout the country, 133 projects costing Rs 305 billion are being executed in Balochistan alone.
A sum of Rs 126 billion has already been spent on these projects up to June 2011, and an additional allocation of Rs 28 billion has been made during the current year for federal projects in Balochistan out of Public Sector Development Programme (PSDP), the meeting was informed.

Imtiaz Kazi, Secretary Water and Power and Shakil Durrani, Chairman WAPDA while giving presentation on water sector projects informed the meeting that at present 23 water sector projects are being financed, including small dams costing Rs over 111 billion.  Over Rs. 10 billion have been allocated during the current financial year for these projects.

The Chairman WAPDA informed that two water sector projects Mirani Dam and Sabakzai Dam have already been completed with a combined cost of nearly Rs. 8 billion. Mirani Dam has water storage capacity of 0.152 Million Acre Feet (MAF) with irrigated area of 33,200 acres and Sabakzai Dam has storage capacity of 0.015 MAF with irrigated area of
6,875 acres.

Chairman WAPDA informed the meeting that almost 60% of work has been completed on Kachhi Canal water project which will irrigate 102,000 acres in the first phase, which will increase to over 700,000 acres after the completion of second phase of the project. The President directed that the Kachhi water project should be completed on priority basis so that the people drew immediate benefit from the project.

RBOD – III, a drainage project will be completed by June 2012 with an estimated cost of nearly 4.5 billion which will benefit an area of over 287,000 acres.

Chairman NHA briefed the meeting on highways, airports and infrastructure development projects and said that Rs. 8.5 billion have been allocated for the 17 roads projects in the province.

He said that airport at Gwadar is financed as a special case by the federal government through PSDP. Rs 1.5 billion have been paid for land acquisition and during the current fiscal year (2011-12), Rs 1.1 billion have been allocated for construction of Gwadar Port.

The President said that future of the country is dependent on the success of Gwadar Port and urged for early completion of Gwadar airport and other roads and infrastructure projects linking the port with other parts of the country so as to ensure robust trade.

The President during the meeting stressed for early establishment of the colleges announced at Khuzdar and Loralai besides providing funding for Turbat and Loralai universities.

He assured that the government, despite difficult economic situation would take all possible steps to make available funding for the various mega development projects being undertaken under the Aghaz-e- Haqooq-e-Balochistan package.

Country to be de-weaponized, vows Rehman