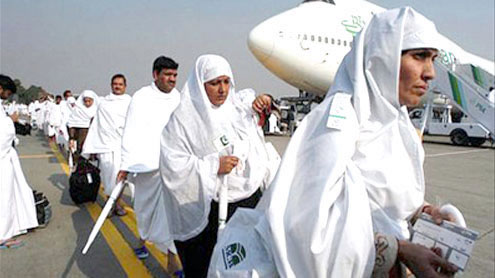 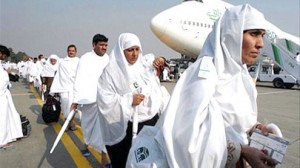 ISLAMABAD: The Supreme Court on Friday directed the Federal Investigation Agency (FIA) to recover money within a week from all those pilgrims who had performed Hajj on government expenses during 2009 and 2010. The court also ordered the FIA to launch criminal cases against those who assisted in the scandal as well as flouted the rules and regulations by sending 270 persons for Hajj, which made the federal government pay Rs 460 million as compensation to those pilgrims who were provided inappropriate accommodation in Saudi Arabia.

During Friday’s hearing, the FIA submitted a report to the six-judge bench, headed by Chief Justice of Pakistan (CJP) Iftikhar Muhammad Chaudhry, which resumed the hearing of the suo motu case of the misappropriation in last year’s Hajj arrangements. The FIA report established that a large number of pilgrims had been sent for Hajj by the Ministry of Religious Affairs (MORA) without any payment. It detailed that the Interior Ministry had written a letter to the MORA for sending officials for performing Hajj and making special arrangements for them. FIA Additional Director General Javed Bukhari informed the court that around Rs 35 million were due against those whose pilgrimage expenses were paid from national exchequer.

As the FIA did not produce any list of those pilgrims from whom recovery had to be made, the CJP expressed dissatisfaction over the investigation process and ordered the agency’s additional director general to personally supervise the probe into the scandal. Appearing before the court, MORA Secretary, Shoukat Durrani, said that the Ministry of Interior had, in its first letter on November 1, 2010, accepted the liability of the pilgrims, but later in another letter asked the MORA to proceed against those who had performed Hajj on public money.

Justice Chaudhry remarked, “Prima facie no one is authorised to perform Hajj on public money without legal justification,” adding that the MORA was equally liable to criminal action. The court ordered Durrani to prepare a list of all those performed Hajj on government expenses in the last 10 years. The other members of the bench included Justice Javed Iqbal, Justice Raja Fayyaz Ahmed, Justice Muhammad Sair Ali, Justice Asif Saeed Khosa and Justice Ghulam Rabbani. The hearing was adjourned until April 22. – Daily Times