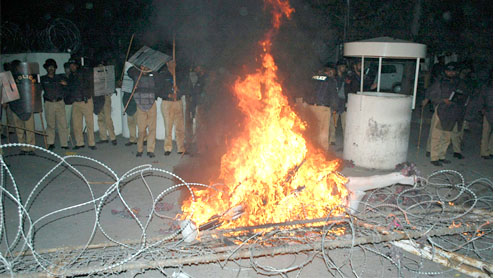 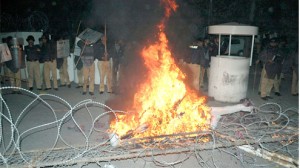 PESHAWAR: Strongly reacting to the release of American citizen Raymond Davis, who had killed two Pakistani citizens, people and activists of religious parties on Wednesday evening held protest demonstrations against the government.The protestors, who came from different localities and gathered outside the Peshawar Press Club, held demonstrations against the increasing US influence in Pakistan and alleged that the rulers were intentionally weakening the basis of the country.

Holding placards inscribed with slogans against Mr Davis`s release, the activists of Islami Jamiat Talba (IJT) said that the rulers had released Mr Davis under the US pressure.They said that the accused deserved capital punishment as he had killed two innocent Pakistanis.Mr Davis was a CIA agent and not an embassy employee, they said and protested his release on the pretext of diplomatic immunity.“The rulers have failed to protect the sovereignty of the country and have no right to remain in power any longer,” the protesters said and vowed to continue demonstrations against the government.Local people from civil quarters, Kohat Road and Arbab Landi also held a demonstration to show their anger over the release of the killer of two Pakistanis. They also shouted anti-US and anti-Zardari slogans.The protesters alleged that the rulers had filled their coffers with the US money and released the accused.Meanwhile, Jamaat-i-Islami, Pakistan Tehrik-i-Insaf and local traders have announced protest demonstrations today (Thursday) against the government for releasing the US killer of two Pakistanis – Dawn