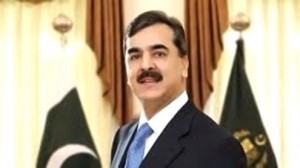 BISHKEK, Kyrgyzstan:  Prime Minister Syed Yusuf Raza Gilani said on Wednesday that it was time for the business communities of Pakistan and Kyrgyzstan to play role in bringing prosperity to the region.Talking to a delegation of Kyrgyz businessmen and investors, the Prime Minister stressed that trade links between Pakistan and Kyrgyzstan must be strengthened for the benefit of their peoples.He invited the Kyrgyz businessmen  to invest in Pakistan’s energy and infrastructure areas.He mentioned the setting up of a Joint Business Council as agreed between Pakistan and Kyrgyzstan on Tuesday, which he said, would help flourish trade activities between the two countries.He invited business delegations from Kyrgyzstan to visit Pakistan and gain first hand knowledge about the facilities the government was offering.

Gilani said that Pakistan offered the shortest access to sea through Gwadar and it had already taken measures to facilitate visa regime to improve  people-to-people interaction.Later Senator (JUI) Ghulam Ali, President of Pakistan Federation of Chambers of Commerce and Industries after attending the meeting, told APP that the Kyrgyz businessmen evinced keen interest in knowing about trade potential in Pakistan.He said that Prime Minister Gilani’s personal interest in encouraging businessmen to interact globally, would help Pakistan become a strong economic ‘Asian Tiger’.Khizer H. Schon, Executive Director Schon Properties told APP that the meeting provided businessmen from both Pakistan and Kyrgyzstan opportunities to benefit from one another.He said direct air links could prove beneficial in boosting bilateral trade to higher levels.Earlier, Khizer Schon also held a meeting with Kyrgyz businessmen in the morning and discussed with them business prospects between the two countries – APP