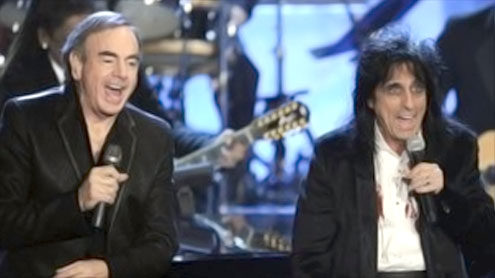 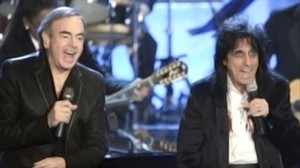 Neil Diamond, Tom Waits and Alice Cooper have become the latest music stars to be inducted into the Rock and Roll Hall of Fame.They were joined by New Orleans pianist Dr John and R&B singer Darlene Love at the annual ceremony in New York.Waits said: “They say I have no hits and that I’m difficult to work with… like it’s a bad thing.”The ceremony will be aired on US cable TV on 20 March.One of the most successful artists of all-time, Diamond’s global hits include Sweet Caroline and Solitary Man.He also wrote tracks for other artists such as I’m a Believer for The Monkees.Alice Cooper is the stage name of Vincent Furnier. Cooper and his band are best known for their theatrical stage shows and hard rock tracks including School’s Out and No More Mr Nice Guy.Love, who sang on several Phil Spector tracks with groups such as The Crystals and Bob B. Soxx & the Blue Jeans, called her induction into the Hall her best 70th birthday present.Singer John Legend, who inducted pianist Dr John, said: “He has never stopped flying the flag of funk.”Dr John’s songs include Right Place, Wrong Time with Allen Toussaint and the Meters, which he performed at the ceremony – BBC