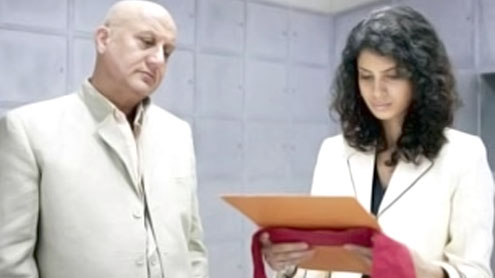 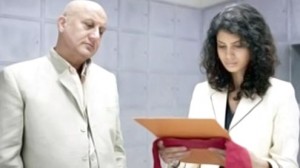 They don’t make whodunits and thrillers like they used to. And films like Yeh Faasle don’t help the cause either. The film has an interesting premise, but it loses the plot on its dozen-th twist and by the end all you actually care about is time left for the credits to roll.This is a murderous attempt at filmmaking, quite literally. Director Yogesh Mittal had a promising story on hand, but he’s managed to maul it into a pulp. A young girl Arunima (Tena Desae) finds herself in an unlikely situation wherein she’s investigating the death of her mother. And as it turns out the main suspect is her doting father Devinder (Anupam Kher). This is a classic whodunit premise with almost every character showcasing grey shades. So as the story unfolds you keep guessing. Interestingly, the movie has five writers including the director Mittal.

And it seems each writer takes the liberty of adding their own twist to the story. So at about two hours into the film when you first feel the conclusion of the film has arrived, you’re in for a surprise. Many even. The twists just keep on coming and by the end of it you’re left exasperated.The characters are all well-crafted and multi-layered so there’s plenty of room for the actors to perform. But no one, with the exception of Kher, rises to the occasion. Newcomer Desae, Pavan Malhotra and Rushad Rana do little to impress. But Kher looks committed to save the film and does marvelously well in playing a paranoid, edgy and eccentric man. He is perhaps the only element in the film that saves this from becoming text book drivel.If you’re watching Yeh Faasle you might feel there’s something wrong with your eye sight, but it isn’t so. The cinematographer has just forgotten to focus the camera in a few scenes. This is not a very well made film and it’s a pity because with a unique premise and some mighty fine acting talent, this could well have been a pleasant surprise. But alas, it’s nothing more than an actor’s solo effort to carry a mediocre production on his shoulders – Filmfare