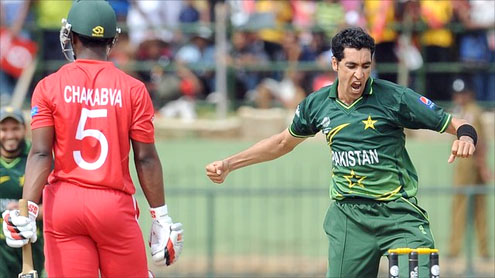 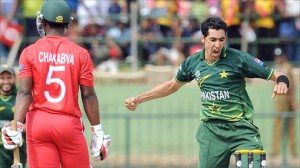 Pakistan booked a place in the World Cup quarter-finals with a seven-wicket victory (D/L method) over Zimbabwe in a rain-hit contest in Pallekele.Zimbabwe, needing to win to keep alive their hopes of reaching the last eight, got their innings made a dismal start as Umar Gul (3-36) left them on 13-3.They recovered to post 151-7 before rain curtailed their innings, with Pakistan set a revised 162 in 38 overs.World Cup debutant Asad Shafiq struck an unbeaten 78 as they cruised home.Shafiq became the eighth Pakistan batsman to score a fifty in his first World Cup innings and, ably supported by Mohammad Hafeez (49), he ensured Shahid Afridi’s team knocked off the runs with minimum fuss with 23 balls to spare.The result means all four spots in the quarter-finals from Group A are taken, with Pakistan joining New Zealand, Sri Lanka and Australia in the knockout stage.Zimbabwe’s tournament is over even though they still have to play Kenya in Kolkata on Sunday, with a solitary victory over Canada their only bright spot in an otherwise disappointing few weeks.

Zimbabwe captain Elton Chigumbura was in positive mood after winning the toss and opting to bat first, but after a slight rain delay it did not take long for the Pakistan opening bowlers to dismantle the Zimbabweans’ top order.Abdul Razzaq had Brendan Taylor caught behind in the first over, before the lethal Gul trapped Regis Chakabva lbw and then had Vusi Sibanda caught at slip by Misbah-ul-Haq to leave Zimbabwe on 13-3 in the sixth over.Tatenda Taibu (19) and Craig Ervine set about a recovery of sorts before Taibu drove Wahab Riaz straight to Afridi at mid-off, Zimbabwe limping along to 96-5 after 28 overs when the first rain delay came.After a 100-minute stoppage they resumed, Ervine reaching his third ODI half-century from 77 balls only to succumb soon after as he was bowled by off-spinner Mohammad Hafeez for 52.Zimbabwe needed a partnership and their best of the innings came when Chigumbura (32) and Prosper Utseya (18) batted in tandem, the duo putting on 48 in 62 balls before Utseya top-edged a ball from Gul to Kamran Akmal.

That was the end of the innings as the rain fell again, with the Duckworth-Lewis method leaving Pakistan requiring 162 runs to win at 4.26 an over, a seemingly routine task for such a classy side.They got into early trouble too, however, as Zimbabwe spinner Raymond Price (2-21 from eight overs) opened the bowling and lured Ahmed Shehzad out of his crease, the batsman stumped by Taibu for eight.Shafiq, handed a World Cup debut in place of Umar Akmal, came to the crease and, despite a nervy start to his innings, soon began to find his feet on the biggest stage of his career.Hafeez was in bludgeoning mood at the other end, crashing Shingi Masakadza for three fours in the fifth over to hit him out of the attack. Buoyed by his partner’s confidence, Shafiq seemed to grow in authority with every ball he faced, a calming presence as Pakistan moved towards their small target.Hafeez was caught by Price off Utseya a run short of his half-century and Afridi’s terrible recent form with the bat continued as he missed a straight ball from Price, losing his off stump to the jubilant Zimbabwean.At 110-3, Younus Khan joined Shafiq in the middle and the 33-year-old ably assisted his young accomplice as Shafiq finished the job, reaching 50 from 76 balls and scoring the winning boundary off Graeme Cremer in the 34th over.Pakistan will end their Group A campaign with a mouth-watering encounter against holders Australia in Colombo on Saturday, but for both teams far bigger contests await – BBC