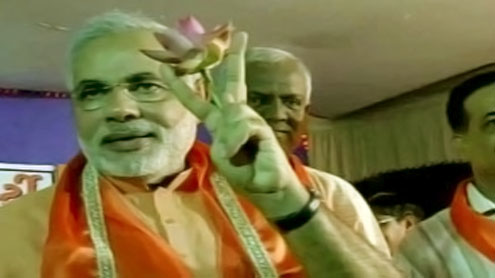 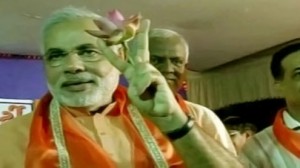 AHMEDABAD/NEW DELHI: In a statement which sent ripples across the armed forces, a serving major general on Monday lavished praise on Gujarat chief minister Narendra Modi, attributing to him qualities of a top-notch army commander who sets targets and then goes all out to achieve them in time.Maj-Gen IS Singha, who as general officer commanding of the Golden Katar Division in Ahmedabad is the seniormost Army officer in Gujarat, was speaking at the launch of the three-day ‘Know Your Army’ exhibition which was inaugurated by Modi at the police stadium ground.”He (Modi) works like we in the Army do. He sets a deadline for completion of projects and then ensures that targets are achieved in time. These are qualities of a successful Army commander,” said Maj-Gen Singha.

Praising Modi for his “vision of development for the state and the nation,” Maj-Gen Singha also requested the CM to follow the example set by other states in providing land to the Army Welfare Housing Organization to help serving and retired military personnel. Modi, on his part, said his government would look into the request. He then went on to add that there was a need for the National Cadet Corps to impart naval training in schools and colleges in Gujarat’s coastal areas, which would ensure that some youngsters opted to join the maritime force.

It is certainly unusual for a senior officer of the largely apolitical Indian armed forces to publicly praise political functionaries. Asked about this, a senior officer at the Army HQ at New Delhi told TOI that an explanation had been sought from Maj-Gen Singha. “The statement has been made in his personal capacity. We are looking into it. If he indeed said so, its inappropriate. His comments have been sought,” said the officer.Another officer, however, said “too much was being read into a customary welcome speech” at the inauguration of a military function. “Maj-Gen Singha spoke in Hindi. It has been twisted out of context in its English translation – TOI