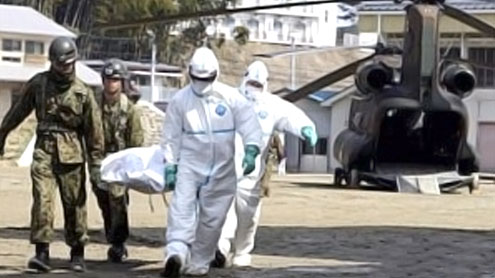 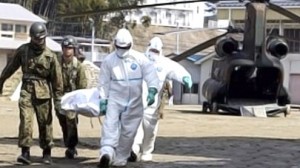 Japan’s Prime Minister Naoto Kan has warned that the shutdown of several nuclear reactors is likely to lead to a shortfall in electricity supply.About a third of Japan’s energy is from nuclear power, and with a big proportion of capacity hit by Friday’s quake it will make outages necessary.The east of the country is likely to face substantial shortages, Industry Minister Banri Kaieda also said.There are fears of further explosions at the Fukushima nuclear power station.Mr Kan said electricity supplies were limited to people in the north-east areas worst hit by Friday’s earthquake and tsunami.He asked industry to cut down on its energy usage and for people to be patient as it could take days for supplies to be restored.”We are trying to secure some support electricity from other facilities and we have asked industry to cut down on their electricity usage,” Mr Kan said.”However we do not have any prospect of restoring the electricity supply within the next few days.

“Therefore there is a good possibility that we will remain with a lack of electricity and there is also a possibility of large scale electricity stoppage and these kind of large scale stoppages will affect people’s lives and also industrial activities.”On Saturday a huge explosion rocked one of its six reactor units, reactor number 1, and sea water was used to cool it down, meaning the reactor is unlikely to be used again.Technicians are now battling to cool reactor 3.In total, 11 of the 50 nuclear reactors in Japan, those located in the worst affected areas, were shut down following the earthquake.Estimates put the reduction in output at Japan’s nuclear power generators at anything from 25% to 50%.Seven boiling water reactors at the Fukushima Daiichi plant and the neighbouring Fukushima Daini plant, both operated by Tokyo Electric Power (Tepco), shut down on Friday.Hokuriku Electric said on Friday all three reactors at its Onagawa nuclear plant on the north-east coast shut down automatically after the quake.Meanwhile, Japan Atomic Power shut down the 1,100-megawatt Tokai Daini nuclear plant on the north-east coast, the closest to Tokyo.

The north-eastern region of the country is covered by Tepco, Asia’s biggest utility firm, and Tohoku Electric Power.”We are taking all measures to restore power, however, we expect [an] extremely challenging situation in power supply for a while,” a Tepco statement said.”We kindly ask our customers to co-operate with us in reducing usage of power.”Tepco’s service region will be divided into five areas and each will have rolling blackouts for three hours a day by rotation, the Agency for Natural Resources and Energy said.These blackouts are expected to continue for several weeks, agency boss Tetsuhiro Hosono said.Meanwhile, Tohoku Electric Power covers the northern region of Japan and it said its power shortage would depend on how quickly the region and its industries can be rebuilt.The Japanese nuclear industry accounts for slightly less than a third of Japan’s power needs.However Japan had planned large increases in nuclear capacity in the coming decade, and those plans may now need to be reconsidered.

The majority of the reactors at Fukushima date back to the 1970s.”Everything has now become a lot more serious following the explosion at Fukushima,” said Tony Regan, analyst at Tri-Zen Capital in Singapore.”I expect far more to be shut down, particularly those of similar age and specification.”It will then be very difficult to bring them back on line even after repairs-upgrading.”It is not the first time Japanese nuclear stations have been hit by earthquake damage, and questions are being asked whether it is wise to build nuclear stations along the east coast, with a seismically-active zone just offshore.Tepco will now be forced to buy power from other utilities.It will also need to obtain a liquefied natural gas and fuel oil to power energy plants, as it did in 2007 when the 8,000 MW Kashiwazaki-Kariwa nuclear plant was shut for two years in the wake of an earthquake.”Given its flexibility, an oil fired power plant is the most suitable in replacing the shortfall of electricity generation, which means heavy crude will see an increase in use in the near term,” said Tomomichi Akuta, senior economist at Mitsubishi UFJ Research and Consulting in Tokyo – BBC