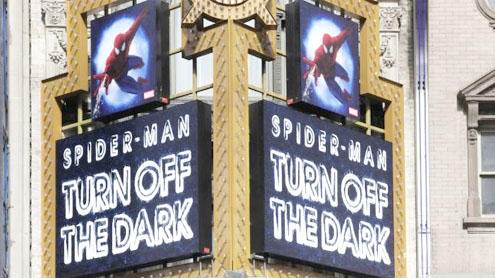 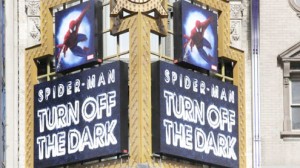 NEW YORK: Julie Taymor, the Tony Award winning director of “The Lion King,” will no longer direct Broadway’s troubled “Spider-Man” musical as producers announced a new creative team and postponed the show’s official opening to summer.Taymor, who also co-wrote the book for “Spider Man: Turn Off the Dark,” will remain a part of the new team, lead producers Michael Cohl and Jeremiah J. Harris said Wednesday, in announcing an unprecedented sixth delay for the musical.”Julie Taymor is not leaving the creative team. Her vision has been at the heart of this production since its inception and will continue to be so,” the producers said in a statement. “Julie’s previous commitments mean that past March 15, she cannot work the 24/7 necessary to make the changes in the production in order to be ready for our opening.”On Wednesday, a friend and longtime associate said the lack of time to hone the show had been one of Taymor’s great frustrations.

“She’s been distraught that there’s so little time to rehearse,” said Jeffrey Horowitz, artistic director of the Theatre for a New Audience.Also distressing to Taymor has been the tenor of much of the news coverage and online chatter. “It’s hard — I try not to look,” she told The Associated Press in a brief conversation in December. She more recently referred to her troubles during a talk at TED, an annual tech conference held this year in Long Beach, Calif.”I’m in `The Crucible’ right now,” she said, referring to the Arthur Miller play about the Salem witch trials. “It’s trial by fire.””She’s distraught at how she’s been labeled,” Horowitz said. “They’ve said she’s an artist only concerned with spectacle. I can tell you that all her visual ideas come from a deeply human idea of the story she is working on. And they say she’s a `perfectionist’ — well, what’s wrong with being a perfectionist?””You don’t hire people like Julie Taymor unless you want people who push boundaries,” he added. “This show is a piece of art, and it has been described as a spectacle gone out of control. That is dangerous — for her, and for other artists who take risks.”

The show’s representative, Rick Miramontez, said no performances will be canceled during the overhaul.Philip William McKinley and Roberto Aguirre-Sacasa have joined the $65 million production to assist with new staging and rewrites for the show, which was to have opened on March 15. Musical consultants Paul Bogaev and sound designer Peter Hylenski are also on the new team.Bogaev, who won a Tony nomination in 2004 for his work on “Bombay Dreams,” has a history of working with rock musicians who craft musicals, including “Tarzan” with Phil Collins and “Aida” with Elton John. Hylenski worked on “Elf,” “Shrek” and “Scottsboro Boys,” among other shows.Taymor’s directing duties will be handled by McKinley, who directed “The Boy From Oz” (2003) and “The Night of the Hunter” (2006). Aguirre-Sacasa worked on HBO’s “Big Love” and has written for Marvel comics, and wrote the play “The Picture of Dorian Gray,” based on the Oscar Wilde novel.

“The team will be implementing a new plan to make significant and exciting revisions to the production,” producers Cohl and Harris said. “This amended schedule will allow the time necessary to execute the plan, which will include revisions to the script.”The delay has taken the show out of the running for Tony Award consideration this year, but it will be eligible for the 2012 season.The stunt-heavy and highly visual musical was co-written by Taymor and Glen Berger, and has music by U2’s Bono and The Edge.”This is an epic ride, and the standing ovations we have seen from the preview audiences have confirmed our absolute faith in the project,” Bono and The Edge said in a statement. “We are listening and learning and, as a result, we have a couple of new songs we are very very excited about putting into the mix.”The unusual move to again delay the show came as “Spider-Man” continues to defy the reviews and post impressive numbers at the box office. It was the second highest-grossing show on Broadway this week, after “Wicked,” pulling in close to $1.3 million — though it was slightly down from the week before.

Indeed, the scene at the Foxwoods Theatre Wednesday was in marked contrast to the turmoil in the headlines. The line to get into the matinee snaked well down a huge city block, and was filled with tourists, an entire class of schoolchildren and others clearly excited to see the much talked-about flying scenes — including an aerial battle between Spider-Man and his nemesis, the Green Goblin. (At the evening performance, Green Goblin’s steering mechanism froze and the stunt was canceled.)”We came all the way from Utah to see this — got in on the redeye this morning,” said Scott Clayson, a father of four from Brigham City. His wife and two daughters, ages 18 and 20, were with him. “A big part of the appeal is all the tricks they do,” Clayson said. “We’re really looking forward to it.”After the show, daughter McKell, 20, was ebullient. “I loved it!” she reported. “It was so different from anything I have ever seen. Really impressive.”As of Wednesday night’s performance, “Spider-Man” has had 101 previews. For comparison, among musicals currently on Broadway, “Wicked” had 25 previews, “American Idiot” had 26 and “The Lion King” had 33. Most critics got fed up last month and reviewed it, largely panning it.

There is no official penalty for keeping a show in previews except embarrassment, something with which this show is familiar: It easily beat the 71-show mark for a musical having the most previews, which was held by Arthur Laurents’ “Nick & Nora” in 1991. That may not bode well for the comic book hero — “Nick and Nora” collapsed a week after its official opening.”Spider-Man” is unusual in that it has been built specifically for the 1,928-seat Foxwoods, meaning a traditional tryout outside New York to fix glitches and smooth out problems wasn’t possible.Unlike “Wicked,” tickets to “Spider-Man” are now available at the discount TKTS booth — a possible reason that total grosses slipped last week.Also last week, the show’s production company was issued three violations of workplace safety standards by federal regulators for four separate incidents late last year that resulted in injuries to the cast – Yahoonews