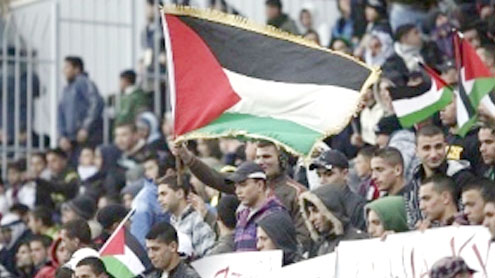 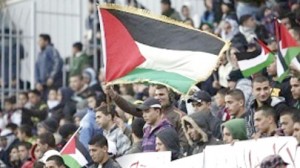 AL-RAM: The Palestinian national soccer team lost to Thailand in a penalty shootout on Wednesday in an Olympic qualifying match deep in symbolism: it’s the first time the Palestinians have hosted a competitive match at the international level, and for excited fans in this conflict-ridden area, it marks an important step in their struggle for independence.Trailing 1-0 from the first leg in Bangkok, the Palestinian team scored the only goal through Abdul Hamid Abuhabib just before halftime but lost 6-5 in the shootout.However, the game meant much more to Palestinians than the final result.”The world now will see Palestine in different eyes, in sports eyes,” said Jibril Rajoub, a former West Bank strongman who now heads the Palestinian soccer union. “This is a new launch for the Palestinian people toward freedom and independence.”The political undertones were ever-present as thousands of fans, mostly men, braved biting wind and cold conditions to fill the bleacher seats, waving banners, blowing trumpets, banging drums and chanting “Palestine” in unison.”In a way, we won the game before it started,” Palestinian Prime Minister Salam Fayyad said. “It’s the first home game for our team and soon we will have the first ever home game in the Palestinian state.”Fayyad said sport is an important element of nation-building, adding that “we are going to be ready for statehood.”Pictures of Palestinian President Mahmoud Abbas and former leader Yasser Arafat decorated the stadium alongside the red, green and black Palestinian flag. Fans chanted, “With our souls, with our bodies, we will defend Palestine.””Without pride you cannot have passion, and soccer is all about passion,” the public address speaker pronounced.Othman al-Jamal, a 20-year-old fan from the northern West Bank town of Tulkarem, said it was inspiring to see his team compete at this level.

“Having a foreign team on the land of Palestine is like breaking the will of the (Israeli) occupation,” he said. “Here we are living a normal life, like the other independent states.”Efraim Zinger, chairman of the Israel Olympic Committee, welcomed the match.”It is definitely a step in the right direction as far as we are concerned, a sign of better things to come,” Zinger said. “The more we deal with sports, the less we will have to deal with the bad things around here.”Some fans unraveled their traditional Arab headscarves to use as makeshift umbrellas when hail pelted the crowd during the second half.The game comes during a time of regional turbulence, a stalemate in Israel-Palestinian peace efforts and increasing calls for reconciliation between the two rival Palestinian political parties.Fatah’s Palestinian Authority controls the West Bank and supports negotiations with Israel for creation of a Palestinian state. Its rival, the Islamic militant Hamas, controls the Gaza Strip after violently seizing control of the coastal strip in 2007. Hamas openly calls for Israel’s destruction.

Wednesday’s match marked another step in the West Bank leadership’s quest to prepare for statehood.In recent years, Fayyad has implemented a bottom-up approach, promising to build institutions of statehood and improve quality of life for Palestinians in the West Bank. The strategy has earned him the praise of both the international community and many in Israel.Rajoub said the last time an international athletic competition took place in what are now the Palestinian territories was in 1934. That game was played in east Jerusalem, part of British Mandatory Palestine prior to Israeli independence in 1948. The history behind the game is unclear, but Rajoub said it is believed a British team comprising of both Arabs and Jews lost 4-1 to an Egyptian team.