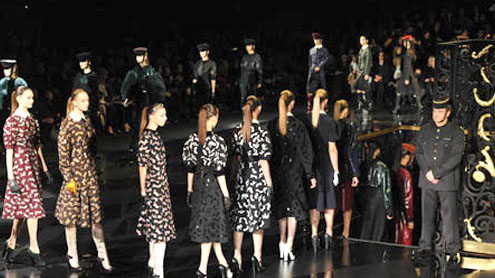 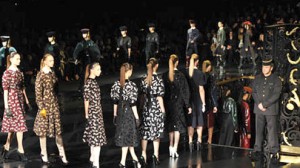 PARIS: Marc Jacobs spends a lot of time on the road, so what better theme for his fall-winter collection for Louis Vuitton on Wednesday than the goings-on inside a grand old hotel?To the sound of elevators arriving, uniformed bellboys opened wrought-iron doors for models stepping out in tongue-and-cheek outfits inspired by, among other things, porn films from the 1940s.”I spend a good part of my life in hotels and I like watching their secret lives, especially the ballet between call girls, mistresses and wives,” said Jacobs, 47, on the final day of Paris fashion week.”It’s interesting to see what the women wear the day after,” added the native New Yorker who joined Louis Vuitton as creative director in 1997. “We know very well that fashion is role-playing. We can invent our own characters.”Chambermaids were well represented, distinguished by dainty white collars on, for instance, a jacket and cropped pants with leather insets. More ladylike guests stepped out in demure coat-dresses with oversized buttons.Then there was a transparent raincoat with the Louis Vuitton logo, worn with little crystal handcuffs. “It was sweet,” said Jacobs, cigarette in hand.The last to check out of Hotel Vuitton was the British supermodel Kate Moss, looking leggy in a rubberised lace jacket with — often seen this season — clipped Mongolian fur sleeves.Most looks emerged with a Louis Vuitton bag of one kind or another, as well as bellboy hats with the iconic “LV” lego that is such a money-spinner for the brand’s French corporate parent, LVMH Moet Hennessey Louis Vuitton.LVMH is owned in turn by Groupe Christian Dior, whose couture unit abruptly ditched its chief designer, John Galliano, on day one of the collections amid a scandal over alleged anti-Semitic remarks uttered at a Parisian cafe.Galliano, 50, regarded as one of the finest designers of his generation, apologised for his conduct, but denied being anti-Semitic, as he reportedly checked into a rehab centre in the United States pending a trial in France.

Later on Wednesday, Elie Saab, the Beirut-based couturier to Middle Eastern royalty and international film stars, brought fashion week to an elegant close with a 1960s-tinged collection with a tall, slim silhouette.To a Serge Gainsbourg soundtrack, the 46-year-old designer opened his show with a rich black fur throw over a leather top and black pencil skirt, followed by shades that varied in turns from black to red to floral prints to purple.Evening wear literally glittered “like constellations” in silver white, dark purple and black for what the programme notes called a return of chic with “welcome simplicity.”Unsurprisingly for a designer who dressed Halle Berry for her best-actress Oscar moment in 2002, Saab also sent out a lush selection of flowing gowns ready for red-carpet duty – Yahoonews