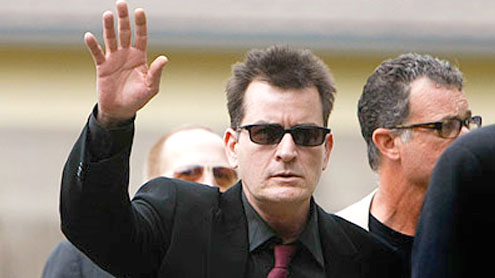 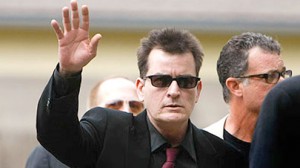 Actor Charlie Sheen has been fired from the hit US sitcom Two and a Half Men by Warner Bros Television.The studio said it had acted after “careful consideration”. The news comes amid a frenzy of US media reports on Sheen’s controversial personal life.No decision has been made on the future of the television series, a spokesman for Warner Bros said on Monday.Sheen, the highest paid actor on US television, has also appeared in films including Wall Street and Platoon.Production of Two and a Half Men had been suspended since late January after Sheen, the son of Hollywood actor Martin Sheen, entered rehabilitation for reported drug and alcohol abuse.The sitcom is the most popular series on the CBS television network.”After careful consideration, Warner Bros Television has terminated Charlie Sheen’s services on Two and a Half Men effective immediately,” Warner Bros said in a statement.When asked by the Associated Press news agency if he would sue, Sheen replied via text message with the word “big”. He added his next move would be a “big one”.”This is very good news,” he said in a statement obtained by celebrity website TMZ.Production on Two and a Half Men was officially halted in late February after the 45-year-old actor insulted Chuck Lorre, the show’s producer and co-creator, in several interviews.The actor had a contract with Warner Bros that ran to the end of the 2012 television season, providing him with $2m (£1.2m) per episode.Sheen said last week he was being paid too little and demanded an increase to $3m per show.Over the past few weeks, Sheen has given a series of often angry, rambling media interviews. He insists he is drug-free after undergoing rehabilitation in January.The actor was taken to hospital in Los Angeles in January with severe abdominal pains before entering rehab.

He filed for divorce from his third wife, Brooke Mueller, in November, citing irreconcilable differences.Meanwhile, Sheen posted a message on the micro-blogging website Twitter early on Monday, searching for an intern to assist him in his work.The tweet, posted prior to Warner Bros’s announcement, was a paid-for endorsement from the website Internships.com.”I’m looking to hire a winning INTERN with TigerBlood,” Sheen’s message said.The actor has used social media websites to comment on the dispute between himself and the show’s producers.It took him roughly 24 hours to reach 1 million followers on Twitter – a record for the website – BBC