Bollywood hotties and their Dirty Dancing 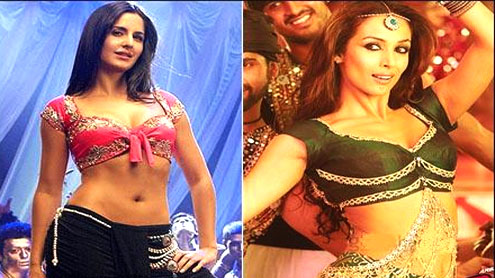 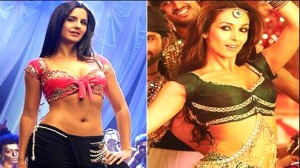 Be it 1950s or 2011, item songs have always been seen as the X-Factor of Hindi films. Sreya Basu finds out what makes the hip-shackers a guaranteed success at the Box Office.Back in 1960s Helen’s name on film posters used to be magnified and got more space than the heroine’s. And a dance number by Bindu or Aruna Irani was like an insurance policy for the film’s success.

The scene remains unchanged even today where Salman Khan needs a Munni Badnaam to garnish his Dabangg. Or, Sheila Ki Jawaani saves Farah Khan from being doomed by an otherwise flop Tees Maar Khan.No matter how much film-scholars scrowl or criticize item numbers, Hindi films are unimaginable without the taadka of hip-swivelling chartbusters.Talking about item numbers, how can we forget the ‘hottie ready to go naughty’ attitude of item girls!Remember Nadira looking into Raj Kapoor’s eyes and singing Mudh Mudh Ke Na Dekh in Shree 420, or Helen stripping off her red gown and running to her on-screen lover in Piya Tu (Caravan), or a Bindu flaunting her yellow feathery attire before Ajit and Amitabh Bachchan and swaying to Dil Jalon Ka in Zanjeer?

While Nadira was a seductress, Helen was effortless…she was a born item girl. She had class and hence even her skimpy costumes never looked vulgar on-screen…but there was oodles of sex appeal for sure.And whoever said you need a Size Zero figure to enter a man’s fantasy should watch out for Bindu. Despite her typical Punjabi curvaceous figure, she ruled the ‘60s and ‘70’s and how powerfully!Sridevi was nicknamed Hawa Hawaii…thanks to her fruity item song in Mr India; Madhuri Dikshit too became the Dhak Dhak girl for her sensuous number from Beta.“Malaika Arora was more popular as the Chaiyan Chaiyan (Dil Se) for her item number on a moving train until Munni happened. Now even a kid knows her more as Munni than Malaika,” says costume designer Ashley Rebello.Not to forget, Rakhi Sawant owes her so-called stardom to item songs like Dekhta Hai Tu Kya and Bichua (other than her publicity stunts).

While Rekha matured from Pyaar Do Pyaar Lo (Jaanbaaz) to Kaisi Paheli (Parineeta), known for playing cerebral roles, Shabana Azmi reported danced away all night to Munni Badnaam on her 60th birthday party.No matter how much butter item girls add, it’s the music that is the hing of a particular number.“A film has a number of songs…romantic, tragic, soft, loud. But the item song has to be a fun number. It must have the capacity to make people jump off their seats at theatres, blow whistles and do all sorts of mad things,” says music composer Anu Malik.And by fun, we need not mean only comedy…be it AR Rahman’s Mayya Mayya (from Guru) or Vishal Bharadwaj’s raunchy Beedi (from Omkara)…the main criteria is to make sure a saint turns Mithun Chakraborty (oops…read, disco dancer).But then, fun songs need lyrics of equal stature. Wordings for an item number has to be wicked…something like Choli Ke Peeche Kya Hai or Pyaar Tera Dilli Ki Shardi or Main Zandu Balm Huyi Darling Tere Liye.“I prefer lyrics that are subtly cheap as opposed to downright cheap. For item songs it’s imperative to get words that one has never heard of. Like I hit on Chamma Chamma for China Gate,” says Anu Malik.

However, it’s singers who make the songs come alive. While Asha Bhosle was brilliant with the Ahh..ahh..ahh background in Piya Tu, Sunidhi Chauhan’s high pitches are essential for songs like Sheila Ki Jawaani or Chaalia (from Tashan). Or we need Rekha Bharadwaj’s earthy flavours to spice up Namak Ishq Ka.“I am known for soulful numbers. But in Namak Ishq, I brought out a little naughtiness…a little flirtatious quality is needed for item songs,” says Bharadwaj.And if singers give life to a song, dance moves make audiences go gob-smacked. Who thought Miss Prim and Proper Aishwarya Rai will turn on the heat with her Kajra Re!Be it Yeh Mera Dil (Don), or Mehbooba (Sholey) or Ek Do Teen (Tezaab) or Mayya Mayya (Guru)…the hip movements, suggestive gestures, seducing looks, turns and twists of waist drive the masses wild.And then of course, costumes add zing to item numbers.

“Costumes should be sensuous and sexy, rather than out and out cheesy,” says Ashley Rebello.“I went for a complete gaonti look for Munni…flower-printed skirts, tights and jewel-studded blouse. Since Malaika’s entire torso needed to be exposed, I came up with chains that were attached beneath her blouse to the waistband of her skirt,” says Rebello.Last, but not the least, an item song is incomplete without a complimentary backdrop.The Babuji zara dheere chalo number won’t have been a whip-crack hit unless Yana Gupta made and entry riding on a buffalo.The effect of Jhumma Chumma song would have been halved if Kimi Katkar won’t have been surrounded by mill-workers banging their enamel mugs in chorus.Having said that, as Anu Malik once commented on the sets of Indian Idol-Romantic is nice, but item numbers are and will continue to be the spice of Hindi films – Santabanta