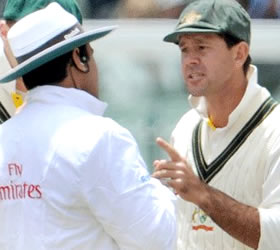 MELBOURNE:Australia captain Ricky Ponting has been fi ned 40 per cent of his match fee after being found guilty of breaching the ICC’s Code of Conduct during the Boxing Day Test against England. Ponting was charged with a Level 1 offence under article 2.1.3 (h) of the code which relates to “arguing or entering into a prolonged discussion with the umpire about his decision”. Ponting pleaded guilty to the charge and as such, under the provisions of the code, the matter was determined by Ranjan Madugalle of the Emirates Elite Panel of ICC Match Referee without the need for a full hearing.Australian captain Ricky Ponting may like his team and fans to think that he is coping with the Damocles’ sword hanging over his head. However, the truth is far from it, as Ponting’s frustrations boiled over when he lost his temper at umpire Aleem Dar after a caught behind appeal against Kevin Pietersen went in the England batsman’s favour.

The incident occurred in the 84th over of England’s first innings in the post-lunch session on the second day of the fourth Ashes Test at the Melbourne Cricket Ground (MCG).Australia’s wicket-keeper Brad Haddin, who was the only Australian to appeal, was adamant that Pietersen, then on 49, had edged a catch to him off Ryan Harris’s bowling. Ponting asked for a referral after Dar ruled in Pietersen’s favour.And, though the replays didn’t show signs of an edge, Hot Spot showed a flash on the bottom of Pietersen’s bat, which could have come as a result of the bat striking the pad.Based on the evidence he saw, TV umpire Marais Erasmus upheld Dar’s decision. It was at this stage that Ponting, who could be on the verge of losing his third Ashes series as captain, lost all self-control and had a prolonged heated and finger-wagging argument session with Dar. Ponting was joined in this show of disrespect by Peter Siddle, and both these Australian cricketers can expect a hearing with match referee Ranjan Madugalle after the day’s play. After arguing with Dar for around five minutes, Ponting then pleaded his team’s case with square leg umpire Tony Hill before asking Pietersen if he had hit the ball. Pietersen was out shortly afterwards for 51 when Siddle trapped him plumb in front – Nation