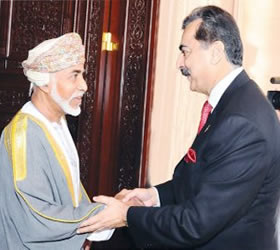 MUSCAT, Oman: Pakistan and Oman on Monday agreed to pursue more robust relationship with closer collaboration in defence, labour and manpower and between their private sectors.Prime Minister Syed Yusuf Raza Gilani in an audience with Sultan Qaboos bin Sa‘id at his Palace here, discussed regional situation and the measures taken by Pakistan to address its economic and security challenges in the wake of terrorism and extremism.The two leaders held an extensive discussion on bilateral issues and ways to explore new avenues of cooperation, during their around an hour and a half long meeting at the Bait al Baraka Palace, overlooking the Gulf of Oman.They agreed on early implementation of the decisions taken by their Joint Ministerial Commission in March this year and directed their Foreign Ministers to meet at an early date to their implementation through institutionalized mechanism.Prime Minister Gilani and Sultan Qaboos also agreed that the accords on defence cooperation, business sectors, labour and manpower, in their final stages needed to be brought to fruition.

Earlier, Sultan Qaboos received the Prime Minister and his delegation at the entrance of the Palace. Prime Minister Gilani’s delegation includes Foreign Minister Shah Mahmood Qureshi, Federal Minister for Ports and Shipping Babar Ghauri and Nabil Gabol and Chief Minister Balochistan Nawab Aslam Raisani.The 70 year old Sultan Qaboos ibn Sa‘id is a graduate of the Royal Military Academy Sandhurst and known as a founder of the modern Oman, that has undergone a massive political and economic transformation under his rule since 1970.The two leaders also discussed increased defence cooperation between their armed forces, defence procurement, joint exercises, training and exchange of defence delegations.The two countries had been collaborating since long, in their defence sectors, particularly the air and naval forces and are in the process of inking an agreement to give it a final shape that would also include procurement of defence related equipment.Prime Minister Gilani and Sultan Qaboos discussed a whole gamut of regional issues regarding Afghanistan, India, Iran, Iraq and Palestine. There was consensus on both sides for Iran’s right for peaceful nuclear energy programme and that sanctions were not a solution.Both sides also agreed that the issue of settlement between Palestine and Israel should be resolved without any delay and called for ending of Gaza siege. They were of the view that new settlements were not doing any help and that both the sides need to co-exist peacefully.

On Afghanistan issue, Sultan Qaboos recognized the role of Pakistan in the war-ravaged country’s reconstruction and rehabilitation. Prime Minister Gilani said Pakistan supported Afghanistan’s peace and stability.On Pakistan’s relations with India, the Sultan said their fraternal ties were in the region’s interest and endorsed Prime Minister Gilani’s call for composite dialogue for the resolution of all outstanding issues.Prime Minister Gilani noted that the bilateral trade between the two countries was around 286 million dollars in 2009-10 and there was a wide scope for expanding it multi-fold.  They noted that bilateral trade had risen from US 8 million dollars in 2004-05 to US 331 million dollars in 2008-09 and called for several new areas identified by the two sides to be tapped.Both the sides agreed that the Labour and Training Agreement between the two countries be signed in near future.Gilani mentioned that the Pakistani manpower in Oman had risen from 65,000 to around 175,000 from year 2005 to present. He offered more skilled personnel including: engineers, doctors, IT professionals, accountants and paramedics for their services for Oman.Sultan Qaboos welcomed more skilled manpower from Pakistan and expressed satisfaction over the level of contribution made by the Pakistani expatriates residing in Oman.Gilani said it was also a matter of great pride that since its creation, hardworking and committed Pakistanis have contributed towards Oman’s development.Sultan Qaboos appreciated the role Pakistani expatriates in Oman’s progress and prosperity.

The Prime Minister pointed that the remittances from Oman to Pakistan have increased from $130 million (Dh477 million) to $287 million in five years.Prime Minister Gilani proposed initiating a cargo service between Gwadar and Muscat. Sultan Qaboos welcomed the proposal and said it would be considered.He said Pakistan and Oman had important historical and geographical links with trade activities between Gwadar and Muscat.  Sultan Qaboos during his visit to Pakistan in 2001, had announced a US $100 million grant, the larger chunk of which $64 million was allocated for development of Balochistan.An amount of $17.5 million was earmarked for the Gwadar International Airport. Gilani urged the Oman government to divert the unspent amount of $19.1 million from the grant for the flood relief funds for the people of Pakistan.Sultan Qaboos appreciated Pakistan’s successes against the extremists and terrorists and said time had come for implementation of a world strategy on combating terrorism based on cooperation and exchange of information.He said it was important that the states of the region unite and make necessary arrangements for regional security and stability through dialogue and mutual trust.

Prime Minister Syed Yusuf Raza Gilani said Pakistan and Oman were working for enhanced cooperation and a strategic partnership to bring progress, prosperity and peace in the region PAK-OMAN TIES:The Prime Minister said Pakistan and Oman were bound by a common history, shared values, faith, traditions and commonality of interests and formed the basis of a special relationship with Oman.  He said Oman’s success was Pakistan’s success as it takes pride in the achievements of the Sultanate of Oman.Prime Minister Gilani lauded the tremendous progress achieved by Oman under the sagacious,experienced and visionary leadership of Sultan Qaboos. He also greeted him on behalf of President Asif Ali Zardari, the government and the people of Pakistan on the 40th National day of Oman.Prime Minister Gilani thanked Sultan Qaboos for always standing by Pakistan in the hour of need.He particularly mentioned the support extended by Oman in the aftermath of the devastating earthquakes of 2005 and 2007 in Balochistan, the rehabilitation of the Internally Displaced Persons(IDPs) and the recent floods – App