Prices up as India imports onion 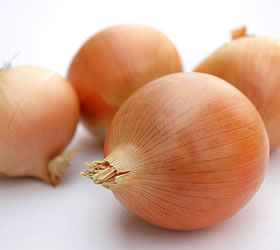 KARACHI : Onion prices are going up in the domestic market as the commodity is being exported to India where the prices have crossed Rs 75 a kg in the wholesale market.Trades here said that this year the production of onion in Pakistan is lower and demanded of the government to place a ban on the export of onion.They said the present sale price of onion which is in the range of Rs 45 a kg would shoot up if the government failed to take action. According to reports 12 trucks loaded with Pakistani onions arrived at the Attari-Wagah border.This was the first export of the vegetable via the land route in 12 years. One truck carries 10-15 tonnes of goods.Indian traders are importing onions from Pakistan to take advantage of the vegetable’s soaring prices in the domestic market.

Onion prices in India have more than doubled over the past few days and crossed Rs 75 a kg in some wholesale markets.On Monday,Indian government suspended export of the vegetable until January 15 to cool the prices. The decision was taken at an emergency meeting of the National Agricultural Cooperative Marketing Federation (Nafed) in Delhi.India had exported thousands of tonnes of onion to Pakistan earlier this year when the country was trying to recover from catastrophic floods.But India is now facing a severe crunch of the vegetable as unseasonal rains have destroyed the crop in Maharashtra and Gujarat.“Foreseeing a poor crop in the country and current high pricesIndians are importing onion from Pakistan through the land route,” said Amritsar-based trader Rajdeep Uppal, who has signed contracts to import over 500 tonnes.A trader at Azadpur Mandi in Delhi, Asia’s largest fruit and vegetable wholesale market, said onion prices would continue to firm up until February – Dailymailnews