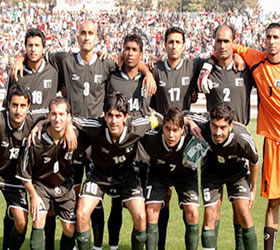 The five-day football event of 31st National Games will be held at Islamabad’s Jinnah Stadium from Dec 25-29. The soldiers, on the other hand, will attempt to make it fourth in a row, having completed triumphs of gold in soccer of National Games three years ago, overwhelming host Sindh in final of 30th.National Games Football Tournament at Karachi’s Peoples Sports Complex. They earlier won the gold in 2001 Games at Lahore and 2004 Games. Karachi’s gold was overall their fifth gold, having won top slot on 1995 and 1997.
Striker Imran Hussain, who represented Pakistan in SAFF Championship-2005 and top scorer in same year of PPFL, alongwith  MVP of PPFL 2004, 2006 Jaffar Khan who skippered the team due to his commitment with National U-23 team to China, will be key players. The team is also comprised of left full Muhammad.Imran MVP of PPFL 07 and goal keeper Mehmood Ahmed, a SAF 2006 Gold Medallist.Army never missed top two place in PPFL since 2004, winning event in 2005,2006 and finished second in 2004, 2007, 2008 and 2009. They are currently second behind PPFL 2010 champion Pakistan WAPDA with 52 points in 27 matches.