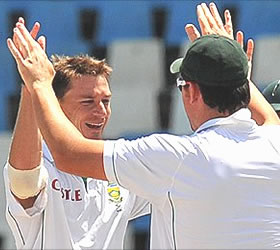 South Africa took India’s final two wickets for only nine runs as they won the first Test in Centurion by an innings and 25 runs.The tourists resumed on 454-8 and failed to add the 31 runs needed to make South Africa bat again.Sachin Tendulkar, who scored his 50th Test hundred on Sunday, was stranded on 111 as Sreesanth and Jaidev Unadkat departed inside 30 minutes.The teams meet again in Durban on 26 December in the second of three Tests.Despite Tendulkar’s landmark score the previous day, unseasonal heavy rain seemed India’s only hope of avoiding defeat on the final day of the series opener.However, the players took to the field in bright sunshine and the 10th delivery of the day brought Sreesanth’s stay at the crease to an end.The tailender edged a Morne Morkel delivery to AB de Villiers at second slip with the overnight total advanced by two runs.India’s demise was complete three overs later when Unadkat diverted a short ball from Dale Steyn to gully.

The visitors had been left fighting a rearguard action once an unbeaten double century from Jacques Kallis had helped South Africa to 620-4 declared and a first-innings lead of 484 runs.Tendulkar’s response was supplemented by useful contributions from MS Dhoni (90), Virender Sehwag (63) and Gautam Gambhir (80), but India ultimately could not recover from a meagre 136 in their first innings.Steyn and Morkel, the world’s best and third best bowlers according to the ICC’s Test rankings, both finished with seven-wicket hauls from the match.South Africa captain Graeme Smith paid tribute to Kallis whose 38th Test hundred leaves him only one behind second-placed Australian Ricky Ponting in a list of Test century makers.”In so many ways, Jacques has been the man who has put the national team on the map,” said Smith.”He has held us together and for the first time he has had a strong batting unit around him in the last few years,” Smith told a news conference.”When he got his double hundred, it was a big moment, the changing room was very emotional and you could see how much it meant for everybody.”Tendulkar dedicated his record-breaking innings to his father who died 11 years ago while the batsman was on tour in England.However the 37-year-old denied that the milestone had acted as a motivation for him.”I play for the love of the game. I have often requested for time out from cricket so that I can come back refreshed and fit.”If I was after records, I wouldn’t ask for rest – BBC