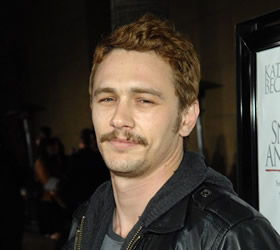 The whimsical way in which James Franco approaches his career choices makes him a breath of fresh air in Hollywood, but even he wasn’t sure about saying yes to the Oscars hosting gig – at first. “When [Oscar producer Bruce Cohen] asked me to host, I was very, very surprised, and my initial reaction was ‘No,'” the actor told Entertainment Weekly. “Then I thought about it and I thought, well, why not? Because I’ll look bad? Well, I don’t care.”

James’ attitude is similar to the one he took when he joined the cast of “General Hospital,” playing artist and serial killer, Franco, earlier this year — a role he is set to shortly reprise — but as for the Oscars hosting job, which he’ll tackle on February 27 alongside brunette beauty Anne Hathaway, James said he was further persuaded to take the gig after a meeting with his people. “All my representatives were saying, ‘No!'” he continued. “That always sparks something in me. So I said, ‘Yes, of course!’ Because that reaction that they have is based on conventional wisdom of what makes a good career. And that can be boring.” A little over two months away from the big night, James has few qualms about how it will all go down. “Even if it’s ‘The Worst Oscars Ever,’ I don’t care. It’s one night of the year,” he added.

In related James news, the actor is set to have a solo exhibition of his short films, drawings, paintings and photographs, at Peres Projects gallery in Berlin, Germany, in February. – Omg.Yahoo