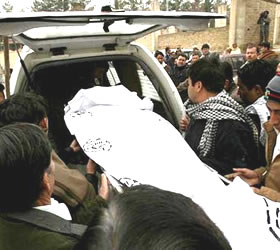 QUETTA: A man and his son were shot dead in Sui and two bullet-riddled bodies were found in Awaran on Monday.Ali Murad Bugti and his son Chacha Khan were shot dead in Gopat area of Sui.In Awaran, police found the bodies of Pakhtun Khan and Miran Jan of Kohistan district of Khyber Pakhtunkhwa after receiving information from local people about their presence in Gushanag area.“They had come to Gushanag for collecting fund for seminary students of Kohistan,” police said.The bodies were sent to their native area by the administration. Last month, four members of Tablighi Jamaat were injured in an attack in a mosque in Awaran – Dawn