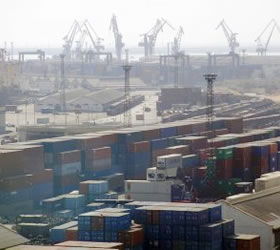 KARACHI: Karachi Port is currently facing massive congestion as international shipping has diverted to the country’s largest seaport from Port Qasim where a weeklong standoff between the dock workers and port authorities has slowed operations at the port to a snail’s pace.Diversion of ships to Karachi Port has left many berths at Port Qasim, the country’s second largest seaport, vacant. A cursory glance at shipping intelligence reports of the two port operators, Karachi Port Trust (KPT) and Port Qasim Authority (PQA), reveal that berths at Karachi Port are fully occupied; seven berths at Port Qasim are unoccupied.Port Qasim Authority’s berth-wise cargo handling reports show that the berths of Marginal Wharf number I, II, III and IV, Qasim International Container Terminal-VI, Progas LPG Terminal and Iron Ore and Coal Berth were vacant at 0800hours on Saturday. Usually 10 to 15 vessels dock in port; however, now only five ships, including M/v Thor Spirit, M/v Lanka Mahapola, M/v Bunga Almada, Al-Soor II and M/v Al-Wajba were observed at the outer anchorage of Port Qasim on Saturday.

More noteworthy is the fact that, as reveled by the PQA online intelligence report, there is not a single vessel expected to arrive at the Port Qasim where the ship traffic is normally brisk and prone to congestion.Later in the day, only five ships, M/v MSC Sudan, M/v Glory, M/T Al-Nouf, M/T Queen Zeno and M/T Argent Eye Bright, were berthed.Discussing the recent reduced activity level at the port, sources indicated that the labour dispute faced by the PQA and fears that the security situation will spin out of control, have kept vessels away from the port.For some time now, PPP-backed dock workers have been at loggerheads with the PQA authorities over employment at the fully-automated dedicated terminals while the latter believe no manual labour is required. The lingering dispute is said to have compelled shipping lines to divert to Karachi Port which, as the online intelligence report reveals, is overcrowded.The report shows that roughly 19 vessels carrying millions of tonnes of bulk and containerised cargo like cement, crude oil, sugar, canola, vehicles and sulphur, were waiting for dockage at the outer anchorage of Karachi Port. The KPT authorities are yet to determine sailing schedule for the “on port” vessels, shown in the report. Moreover, over a dozen ships await berthing while 18 others ships which are expected next week. This is expected to test the nerves of KPT authorities. The laborers’ dispute at PQA if allowed to fester, will lead shipping lines to continue to divert more and more vessels to Karachi Port which is already faces a great challenge in the form of cargo handling with most of its berths at East Wharf not active for at last three years – PT