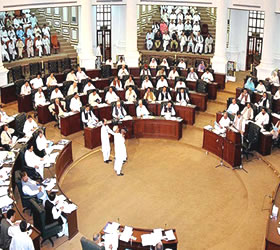 PESHAWAR: The Khyber Pakhtunkhwa Assembly is about to complete its third parliamentary year but majority of the lawmakers are still unable to take part in the legislation.Background interviews with senior legislators and officials of the assembly secretariat indicate that a large number of sitting MPAs lack knowledge and experience about legislation and affairs of the house.Out of total 123 incumbent lawmakers hardly three or four members table their amendments or participate in the debate on the proposed laws in the assembly. The house usually witnesses dull sessions and lacks enthusiasm when a bill is introduced.The members, who actively take part in debate on proposed laws or table their amendments in the bills, include Abdul Akbar Khan of Pakistan People`s Party, Saqibullah Khan Chamkani of Awami National Party, Israrullah Khan Gandapur of Pakistan Peoples Party-Sherpao and Mufti Kifayatullah of Muttahida Majlis-i-Amal.

PPP parliamentary leader Abdul Akbar Khan said that majority of the members did not have experience and skills to identify issues and take part in legislation that was why majority of them remained silent during discussion.“When an MPA has the understanding about issues and know how about legislation then he/she will be in position to table private bill or propose amendments,” he added. Information gathered from the assembly secretariat show that 68 government and private bills including finance bills were tabled in the assembly since March 2008.About 12 MPAs, both from treasury and opposition benches, have tabled their bills in the house during the last three years.The members, who have tabled their bills in the assembly, are Mohammad Zamin Khan, Shagufta Malik, Shazia Tehmash, Dr Iqbal Din, Mufti Kifayatullah, Israrullah Khan Gandapur, Saqibullah Khan Chamkani, Abdul Akbar Khan, Noor Sehar, Advocate Khushdil Khan and Sikandar Khan Sherpao.The lawmakers take serious interest in the question-answer sessions, privilege motions, adjournment motions and call attention notices or participate in the house business through point of orders. But they deliberately ignore legislation, which is their prime job.

Officials said that lawmakers had been imparted basic training about legislation under five-year Pakistan Legislative Strengthening Project (PLSP) which was launched in 2005.The United States Agency for International Development had financed the project to train members in drafting legislation, parliamentarian procedures and budgeting. They said that assembly secretariat had staff to assist legislators in drafting bills or amendments, but members did not seek technical help from the secretariat.“In previous assemblies, lawmakers comparatively actively participated in debate on bills and brought their own amendments, but performance of this assembly is not up to the mark,” said an official.He said that members showed more interest in other business including privilege motions and questions-answers.Speaker Kiramatullah Chagharmatti during ongoing session also asked lawmakers to take part in legislation.A young MPA said that senior lawmakers and parties parliamentary leaders did not encourage their own lawmakers to participate in the house business. He put the blame for the poor performance of the assembly on the political parties.Those members, who tried to table their own bills or amendments, were not in the good books of the party leaders, which was hampering the promotion of legislative process – Dailymailnews