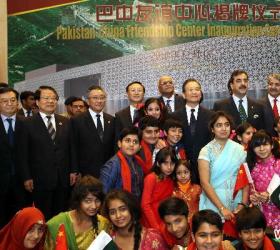 Wen, who is on a three-day official visit to Pakistan, said he was pleased to launch the center that would be a demonstration of deep bonds between the two countries.

Gilani said the launching of the center reflects the closeness of the two peoples and the bonds of friendship and affection.

The two leaders visited a photography show at the center featuring Pakistan-China friendship, and shared with representatives from both countries their contributions to the close bilateral relations.

Wen and Gilani then planted a pine sapling in the square of the center as an icon of the growing friendly relations between the two countries.

Built in the forest garden area of Islamabad, the China-aided center is a multi-functional building with facilities for conferences, lectures, performances, exhibitions, cultural and trade activities. The foundation of the center was laid by Wen during his last visit to Pakistan in April 2005.

Wen was to conclude his official visit on Sunday after addressing a joint session of Pakistan’s parliament.

China and Pakistan established diplomatic relations in May 1951. The two countries have developed an all-weather friendship and all-round cooperation since then.

China has pledged an aid package of 250 million U.S. dollars to Pakistan after the floods hit the South Asian country and affected more than 20 million people, the largest-ever humanitarian aid China has offered to a foreign country. – Xinhuanet