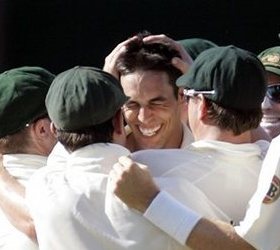 Australia removed England’s last five wickets early on Sunday to win the third Ashes test in Perth by 267 runs and level the five-test series at 1-1.

England had resumed on 81-5 needing another 310 runs to seal an unlikely win and take the Ashes home for the first time in 24 years but paceman Ryan Harris snuffed out their hopes with four wickets as they were skittled for 123 within an hour.

The comprehensive victory was a remarkable turnaround for the hosts after last week’s innings and 71-run hiding in the second test in Adelaide.

“No better birthday present than that, winning an Ashes test match,” said Australia captain Ricky Ponting, who turned 36 on Sunday.

“Especially after last week. We had to bounce back and respond and the players need to take a great deal of credit for that … We’ve played the test match cricket I knew we were capable of this week.”

Harris bowled nightwatchman James Anderson for three in his second over of the morning with a sizzling fuller delivery that sent off-stump flying.

The 31-year-old then trapped Ian Bell lbw for 16 for his fifth wicket of the inning. Bell requested a review but the simulation showed the ball crashing into middle stump.

Harris had Prior nicking an edge to gully three balls later where Mike Hussey capped his brilliant test match with the bat with an acrobatic catch, diving to his right to dismiss the England wicketkeeper for 10.

Mitchell Johnson, who took 6-38 in England’s first innings, picked up his ninth wicket of the match when he had Graeme Swann play onto his stumps for nine.

Harris then removed Steve Finn for two, the paceman edging to Steve Smith at third slip to wrap up the innings and leave Australia with all the momentum heading into the fourth test at Melbourne.

“Cricket’s a funny game,” said England captain Andrew Strauss. “We’re disappointed with our performance, there’s no doubt about that.

“Give credit to Australia, you’ve got to take your hats off to them, but we’re still upbeat and we’ve still got a good chance of winning this series.”

Ponting did not take the field after breaking his little finger in a catch attempt during Jonathon Trott’s dismissal on Friday but said he was hopeful of being fit for the next match, which starts on Dec. 26.

“I think I’m a good chance to play in Melbourne,” the Australian skipper said. “We’ve got a little bit more recovery time. Fingers crossed everything will be okay.” – Dawn News

‘Butt ‘willing’ to give lie-detector test’