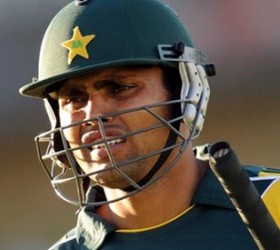 The Pakistan Cricket Board’s (PCB) Integrity Committee has handed over three questions — concerning fixing controversy — to Shoaib Malik and two to Kamran Akmal seeking satisfactory responses from both, as a precondition for their return to the national fold, well-informed sources told Dawn on Thursday. The Integrity Committee, headed by PCB Chairman Ijaz Butt, held a six-hour session here on Wednesday, during which Malik, Kamran and leg-spinner Danish Kaneria were questioned mainly about suspicions over match-fixing. As Kaneria is not a regular player in limited-overs cricket, the Committee is focusing primarily on Kamran and Malik, while the selectors are wait for the outcome of the duo’s case in order to finalise the 30-probables list for the World Cup. The Mohsin Khan-headed selection committee also wants to know about the availability of the said players to pick the ODI squad for the six-match series against New Zealand.

Hopefully, Kamran and Malik will hand over their replies to the Integrity Committee by Monday, after which it is expected that the Committee will hold a meeting to reach a conclusion. Sources said Kamran also produced a clearance certificate — issued by the ICC in his favour — to the Integrity Committee. Still, sources added, Kamran had some questions to answers. Moreover, the PCB also rejected the request of Kamran to release his arrears of the last series, which he had played. “First, try to clear yourself for selection,” was PCB’s reply to Kamran, sources said. Though the last date to submit the World Cup probables’ list to the ICC is Dec 19, the PCB has sought an extension from the game’s world governing body until next week. The PCB did not consider Kamran, Malik and Kaneria for the last series against South Africa and now for the upcoming Twenty20 and Test series in New Zealand. However, officially the PCB had not yet announced any exact reason for which the three cricketers have been kept at bay.

Last week, the three players met the PCB officials and asked about the reasons for being sidelined. And for that purpose the Integrity Committee met in Lahore on Wednesday and gave them the charge-sheets. Interestingly, the ICC, which earlier had asked the PCB for a list of 40 probables for the World Cup, from which the PCB had to announce 30 afterwards, could not take any decision over Kamran and Malik. And the world body then asked the Pakistan board to include any player after ensuring no selected cricketer was involved in any wrongdoing. – Livepakistan

Three US missiles kill 54 in Pakistan