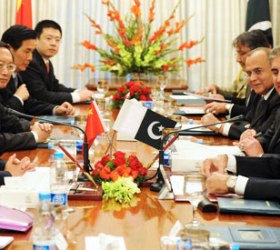 China and Pakistan signed around 20 billion dollars’ worth of deals Friday, boosting trade and investment as Wen Jiabao became the first Chinese premier in five years to visit the nuclear-armed state. Pakistan considers China its closest foreign ally and treated Wen and a massive business delegation to a red-carpet welcome. The two countries signed 13 agreements and a memorandum of understanding in fields including energy, rail transport, reconstruction, agriculture and culture, Information Minister Qamar Zaman Kaira told reporters. “China will provide assistance in 36 projects in Pakistan to be completed in five years,” he said. “Basically this is a five-year development plan.”

He said 14 billion dollars will come through a joint economic cooperation group, five billion dollars in other business agreements, while deals worth another 10 billion dollars are expected to be concluded at a business leaders’ meeting on Saturday. “Overall the Chinese investment is expected to be around 30 billion dollars,” he said. Although the deals are vitally important to the moribund Pakistani economy, they pale into comparison with Wen’s agreement in Pakistan’s arch rival India on Thursday where the two countries agreed to double bilateral trade to 100 billion dollars by 2015. Wen’s visit was accompanied by blanket security as Shia Muslims marked their holiest day, Ashura, which was last year marred by a bomb at a Karachi religious procession that killed 43 people. “We have unprecedented relations with China. The whole nation is proud of the Pakistan-China friendship,” Prime Minister Yousuf Raza Gilani told PTV.

The Chinese premier held talks with Gilani after being greeted at the airport by Pakistan’s entire cabinet and military chiefs, who depend on Chinese hardware, and a guard of honour with a 21-gun salute. Pakistan says China has already agreed to development projects worth 13.2 billion dollars in energy, agriculture, infrastructure and health, and wants trade to climb from seven billion to 18 billion dollars in five years. “Work on projects worth 14 billion dollars is continuing at present, while projects of another 20 billion dollars will be signed between the two sides during the visit,” a Pakistani government official told AFP earlier.

Wen will also meet President Asif Ali Zardari, address a joint session of the Pakistani parliament, attend a business cooperation summit during his visit and inaugurate a new Chinese cultural centre in Islamabad. Behind the scenes, talks are also believed to be planned on China building a one-gigawatt nuclear power plant as part of Pakistani plans to produce 8,000 megawatts of electricity by 2025 and overcome acute energy shortages. The West has expressed concern about the security of Pakistan’s nuclear material, but China has built a 300-megawatt nuclear power reactor at Chashma in central Punjab province and another of the same capacity is under way. Without going into details, officials in Pakistan admit the country has a civil nuclear cooperation agreement with China, a counter-weight to India’s agreement with the United States on nuclear energy cooperation. Pakistan depends on China’s financial and political clout to offset the perceived threat from rival India and rescue its economy from the doldrums of catastrophic flooding, a severe energy crisis and poor foreign investment.

China will open branches of the Industrial and Commercial Bank of China (ICBC), its top private bank, in Karachi and Islamabad, Kaira said. Pakistan’s prime minister has expressed hope that trade will rise to between 15 and 18 billion dollars over the next five years. But security issues will also likely weigh on the agenda. China has been concerned about the threat of Islamist militants infiltrating its territory from Pakistan, particularly in its western Xinjiang region. – App

US to continue long term cooperation with Pakistan: US Envoy