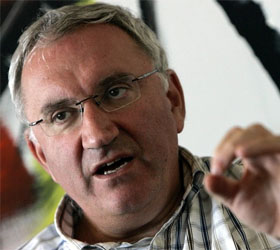 NEW YORK (Reuters) – Amgen Inc’s chief executive met with the top executive of Swiss biotech firm Actelion Ltd to discuss his interest in Actelion, but made no offer for the company, Bloomberg reported on Sunday, citing three people with knowledge of the situation.

One source told Bloomberg that Sharer was looking to gauge Clozel’s interest in a deal. Another person said that Clozel would like to keep the firm independent. Amgen, the world’s largest biotechnology company, has said it is eyeing acquisition opportunities overseas as it looks to spend billions of dollars in offshore cash that would otherwise be subject to heavy taxation were it to be repatriated.

In recent weeks Actelion, which specializes in treatments for pulmonary hypertension, has repeatedly come up in market rumors as a potential takeover target for Amgen, with analysts speculating the U.S. company could pay $9.8 billion, or $75 per share, for the Swiss biotech.

Amgen and Actelion could not be reached for comment – YahooNews