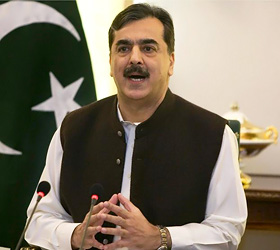 The Prime Minister during his stay in Ankara, will meet Turkish President Abdullah Gul, who will confer on him the ‘Jumhuriyat Nishan’ award at a special investiture ceremony, in recognition of his services for promoting brotherly relations between the two countries.
Gilani besides holding talks with his Turkish counterpart Recep Tayyip Erdogan will co-chair the inaugural session of the High Level Cooperation Council (HLCC). The HLCC provides a unique platform to give a long-term strategic direction to bilateral relations between Pakistan and Turkey.
The prime minister is also scheduled to address the Turkish Grand National Assembly.

In the ancient city of Istanbul, Gilani will interact with Turkish business community at a luncheon hosted by Foreign Economic Relations Board (DEIK) of Turkey.

UK sees the return of the big freeze

UK sees the return of the big freeze