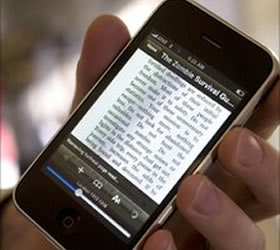 Google hopes to write itself a substantial chapter in the digital books story with the launch of its own store. Google eBooks, formerly known as Google Editions, launches in the US on 6 December. It will allow users to download three million e-books to a range of devices. It will put it head-to -head with Amazon, which links its Kindle device to its own store, and Apple with its iBookstore.

The launch of the service has been delayed, due to legal and technical wrangles. But Google is hopeful that its “device agnostic” store will rewrite the current generation of digital books. “It benefits authors because they will be able to be more visible and more accessible than with the physical constraints of a book store,” said Santiago de la Mora, director of books at Google. “It will also be good for publishers who will be able to promote backlist titles,” he added. James McQuivey, an analyst with research firm Forrester, predicts Google could become an important player in the market. “It is sitting on information that no-one else has. It knows when you are searching for authors and what book titles and that is its biggest strength,” he said. “It may not lure people away from the Kindle but there are tens of millions of people who read but don’t own a Kindle,” he added. According to Forrester, 10.3 million e-readers were sold in the US during 2010, not including the iPad. It predicts that by the end of 2010, the e-book market will be worth $966m (£615m). Google does not have an unblemished record when it comes to digital books. Its work to scan millions of books has courted huge controversy from critics who were concerned that it could become the sole curator of a huge online library. It has been fighting a two-year legal battle with authors and publishers in the US. It has agreed to set up a Books Rights Registry through which authors could register their works and get compensation but no ruling from the US court looking at the case has yet been handed out. Google’s ability to offer users access to classic literature could boost its eBook project, thinks Mr McQuivey. “If you can read Les Miserables for free using Google’s system it is a way to lure people in and whet their appetite for e-reading,” he said. He expects the e-reading market to nearly double in size in 2011. Google’s eBook service is expected to launch in Europe in 2011. – BBC