Chinese PM due on Dec 17 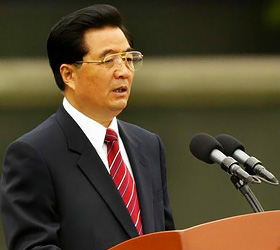 ISLAMABAD, Dec 6 (APP): Chinese Premier Wen Jiabao will pay a three-day official visit to Pakistan from Dec. 17. During the visit, he will meet President Asif Ali Zardari and Prime Minister Syed Yusuf Raza Gilani to discuss wide-ranging topics of bilateral interest. The focus of the talks will be on  building up mutually beneficial economic partnership, and moving forward to have greater understanding and cooperation on regional and international affairs.
Official sources said here that the top-level talks would help deepen strategic cooperation and establish a mechanism for formal and structured dialogue at the ministerial level. They would ensure smooth and real time communication on all issues of bilateral interest and pave way for establishing contacts between the political leadership of the two countries.

The people and the government of Pakistan attach great importance to the decades’ old time-tested and all-weather friendship with China.

Since assuming the office in September 2008, President Asif Ali Zardari has visited China six times, which further consolidated the bonds of friendship.

Besides holding talks with political leadership, he established personal contacts with Chinese entrepreneurs for deepening economic ties between the two countries.

According to the sources, hectic arrangements are being made to accord a historic welcome to the Chinese leader when he arrives here next week.

Besides meeting Pakistani leaders, he is scheduled to address a joint sitting of the parliament.

Ahead of the visit, China agreed to extend co-operation in 36 development projects worth $13.2 billion related to industry, water, energy, agriculture, fisheries and communication to boost economic activity in the flood-hit areas of Pakistan.

China during the 14th session of the Pak-China Joint Committee on Economic, Trade Scientific and Technical Cooperation (JEC) held this week, agreed to enhance Pakistani exports with providing more tariff relaxations.
The two sides also agreed that the Chinese investment would be increased in various sectors of Pakistan’s economy, including agriculture, electricity, finance, mining and infrastructure.

Next year will mark the 60th anniversary of the establishment of diplomatic relations between the two countries.

Liu Jian, Chinese Ambassador to Pakistan, said that China was ready to work with Pakistan to take the opportunity of the 60th anniversary to further expand their friendly cooperation and to bring bilateral relations to a new high.

The ambassador said that the China-Pakistan relationship stood the test of time and continued to enjoy a sound and stable development in recent years. High level visits were frequent.

He said that bilateral cooperation in the fields of trade, energy, transportation, telecommunications and infrastructure continued to expand and deepen.

UK-based charity to construct houses for flood victims in Pakistan