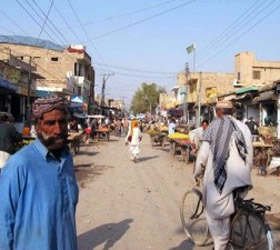 Sibi city is eastern entrance to the Bolan Pass is located in the Balochistan province of Pakistan. The city is located at 29°33′0N 67°52′60E at an altitude of 130m (429ft) and is headquarters of the district and tehsil of the same name. According to the 2001 cencus of Pakistan the population of Sibi is 52,100.

The history of the town goes back to 13th century and due to its exposed position between the mouths of the Harnai and Bolan passes it had suffered frequent assaults and sieges – including one by the British in 1841. During British rule the town became an important junction on the Sind-Peshin railway where the Harnai line and the Quetta loop line meet, near the entrance of the Bolan Pass, 88 m southeast of Quetta. According to the 1901 census of India the population of Sibi was 4551. In 1903 the Victoria Memorial Hall was built from public funds, a piped water supply to the town was provided by military funds from the river Nari at a cost of Rs.115,000.

Sibi is on the western edge of Pakistan and is well connected with the country by a wide
network of roads, railways and airways.

Sibi is well connected by roads to the rest of the country. Sibi is connecting with Quetta, Karachi, Jacobabad, Sukkur and Hyderabad route – Heritage

GCC to focus on regional security