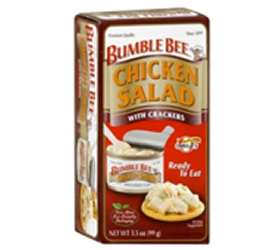 The discovery of hard plastic inside packages prompted a nationwide recall of 72,000 pounds of canned chicken salad, one of several recalls involving poultry and meat products issued through U.S. food safety authorities in recent days. The Suter Company is recalling 8.2-ounce packages of the “Bumble Bee Lunch on the Run Chicken Salad Complete Lunch Kit” and 3.5-ounce packages of “Bumble Bee Chicken Salad with Crackers,” according to a statement released Sunday by the U.S. Department of Agriculture’s Food Safety and Inspection Service. While the company is headquartered in Sycamore, Illinois, its products are sold from coast to coast. The recalled products which have a August 2011 “best-by” date for the lunch kit, and February 2012 corresponding date for the cracker package — were put together and shipped out to distributors and stores between August 14 and 28 of this year.

The recall was prompted by complaints from people who found pieces of loose plastic inside their Bumble Bee packages. The federal agency noted in its release that it hasn’t received any reports of people getting hurt or sick as a result. The recall is a Class II, which means there is a “remote probability of adverse health consequences,” according to the Food Safety and Inspection Service. Meanwhile, two unrelated and separate but potentially more dangerous recalls announced late last week were categorized as Class I, equating to a “reasonable probability that the use of the product will cause serious, adverse health consequences or death.” Federal food safety authorities said Friday that Diana’s Mexican Food Products, of Lawndale, California, is recalling 41,670 pounds of chicken tamales. The tamales contain whey, a known allergen. But the packages don’t note the whey on its labels, said the Food Safety and Inspection Service, potentially imperiling consumers.

The tamales, which went out to restaurants in California, were produced between February and December 2, 2010. There are no known reports of adverse reactions to the undeclared presence of whey, which was discovered by federal authorities in a “routine inspection.” One day earlier, Brooklyn-based N.Y. Gourmet Salads recalled various meat and poultry products because, prior to their distribution, they hadn’t been inspected by federal health inspectors. While there have been no reports of sicknesses, a public health alert was issued October 30 for a host of Gourmet Salad’s products packaged between March 11 and October 29 of this year. The recall list includes 12 items ranging from Swedish meatballs to stuffed cabbage to grilled chicken all wrapped in 4.5-, 5- and 6-pound packages. – CNN